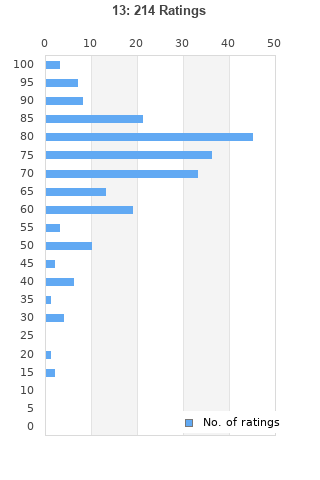 Black sabbath 13 diff inc page advert for never say die sounds cover paranoid ad
Condition: Very Good
Time left: 2h 38m 4s
Ships to: Worldwide
£29.00
Go to store
Product prices and availability are accurate as of the date indicated and are subject to change. Any price and availability information displayed on the linked website at the time of purchase will apply to the purchase of this product.  See full search results on eBay

13 is ranked 9th best out of 39 albums by Black Sabbath on BestEverAlbums.com.

The best album by Black Sabbath is Paranoid which is ranked number 64 in the list of all-time albums with a total rank score of 22,276. 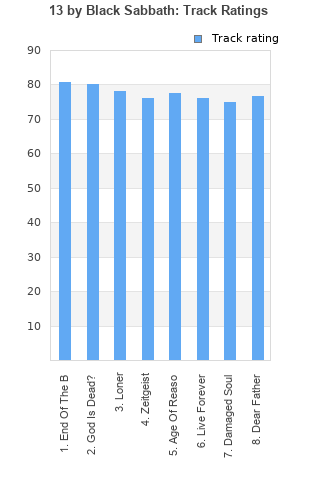 Rating metrics: Outliers can be removed when calculating a mean average to dampen the effects of ratings outside the normal distribution. This figure is provided as the trimmed mean. A high standard deviation can be legitimate, but can sometimes indicate 'gaming' is occurring. Consider a simplified example* of an item receiving ratings of 100, 50, & 0. The mean average rating would be 50. However, ratings of 55, 50 & 45 could also result in the same average. The second average might be more trusted because there is more consensus around a particular rating (a lower deviation).
(*In practice, some albums can have several thousand ratings)
This album has a Bayesian average rating of 72.2/100, a mean average of 71.6/100, and a trimmed mean (excluding outliers) of 72.2/100. The standard deviation for this album is 15.2.

I think this is something different like the question God Is Dead? I’m glad that i bought it and hear nicely to the songs.

I don't really agree that the magic is gone. If anything I am hearing a return to the heavier sound of the first album, Paranoid and Master Of Reality. The opening track is an absolute blinder with some superb guitar soloing not to mention a really heavy opening riff. Yes, the production is better but isn't that a good thing given that the underlying heavy raw sound is there? The keyboards have been stripped back with some very subtle touches in the right places. I like it, in fact I like it very much! And the orange vinyl double album is a real bonus for me!

In my dream world this album would be produced in the same way as the first album, not with all the rough edges knocked off. Number 1 in the UK, 43 years after their first number 1 in the UK. A good album, that could have been great. There were 103 albums better than this in 2013.............

This album was a pleasant surprise, but only because I had no real expectations going in. It is definitely a step up from the last Ozzy album before the breakup (Never Say Die), but it doesn't have the magic of the first six. The group are in surprisingly good form, but this thing is overproduced to the point of being muddy rather than just classic-Sabbath sludgy. Could have been more, but still glad I got it.

Miss the mix being equally mixed for guitar and bass. Geezer is an amazing guitarist and I feel it didn't shine through as much in this mix as other mixes of the past with solid mids of the bass in the mix. 90% of people don't even notice that, but whatevs. Metalheads be all, what's a bass again?

Anyway, I agree with most that the songs aren't quite like they used to be, but this is totally on par with Metallica these days and they are like half their age. Sounds totally metal instead of maybe classic rock metal, if that makes any sense. Kind of like they are borrowing from new metal ideas instead of their original dark/deep sound. They went from a believable dark place to the typical metal dark place (contrived).

It sounds like Black Sabbath but the magic is gone. Mediocre and rather flat it could have been much worse.

Better than I hoped, worse than it could have been. It's shot through with nostalgia/a lack of ideas and recycled riffs, the production doesn't suit it and it's too long. That said, they play really well for their age/health, some of the songs are great (Dear Father, God is Dead?), but it was a long wait for not too much.

It's amazing how close to their decades-old sound these guys come. These dudes are ANCIENT and haven't put a new album together in like 30 years. I find it incredible how well this album rocks as if their last studio collaboration was a couple years ago. Amazing. My favs are "god is dead?" and "loner".

It feels like spitting in my idols' face, but this album was just alright for me. Look, when musicians age, they either age gracefully, letting their work age gracefully with them (see: Bob Dylan, Paul Simon) or they keep making albums hoping that maybe the fact that their music sort of sounds similar to the great music they made 30+ years ago, people will like it despite the fact that they tend to sound like a retiree on a karaoke machine (see: Van Halen, anything Sammy Hagar has done lately, The Who). This falls somewhere in between. Somehow, Ozzy’s voice hasn’t changed in the past 40 years. Ok, maybe it’s changed a little, but it could be a lot worse. He sounds ok here, and the lyrics he’s written are whatever, but really, they’ve always been like that. Tony Iommi and Geezer Butler sound great though, especially Iommi, his guitar work, his riffs, his solos, are as good as ever, I love listening to him play guitar. Brad Wilk doesn’t sound awful, but in all reality, he’s a different drummer than what Sabbath needed, he’s from a different era and you can tell.

The area that “13" fails in most is in the quality of the songs, which in all honesty, are alright. There are some good moments here and there, but generally speaking, the album feels pretty uninspired. There are some obvious throwbacks, especially in “Zeitgeist", which really calls back to Sabbath’s slower songs, songs like “N.I.B." and “Planet Caravan", but they sound like an imitation rather than the real thing. Like I said, there are some good moments, one thing I really love is that Sabbath retained their love of long guitar solos, which sound great, but generally speaking the album is pretty lacking. It’s unfortunate, but I can’t say that I’m horribly surprised. Maybe if Bill Ward joins back up one day, they’ll really crank out something special.