Grotesque (After The Gramme) (studio album) by The Fall 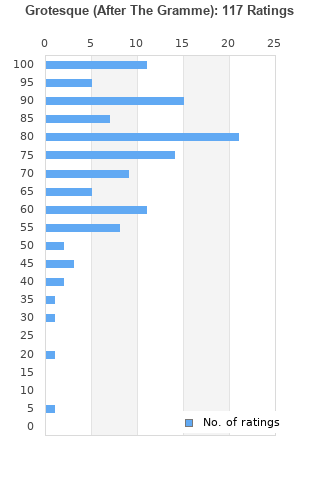 Grotesque (After The Gramme) LP (The Fall - 1980-11-00) ROUGH 18 (ID:15827)
Condition: Used
Time left: 13h 12m 32s
Ships to: Worldwide
$78.50
Go to store
Product prices and availability are accurate as of the date indicated and are subject to change. Any price and availability information displayed on the linked website at the time of purchase will apply to the purchase of this product.  See full search results on eBay

Grotesque (After The Gramme) is ranked 3rd best out of 49 albums by The Fall on BestEverAlbums.com.

The best album by The Fall is This Nation's Saving Grace which is ranked number 853 in the list of all-time albums with a total rank score of 2,217. 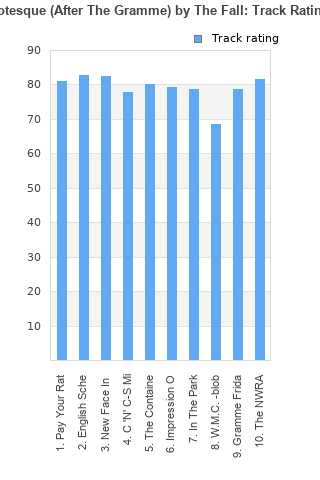 Grotesque (After The Gramme) rankings

Grotesque (After The Gramme) collection

Grotesque (After The Gramme) ratings

Rating metrics: Outliers can be removed when calculating a mean average to dampen the effects of ratings outside the normal distribution. This figure is provided as the trimmed mean. A high standard deviation can be legitimate, but can sometimes indicate 'gaming' is occurring. Consider a simplified example* of an item receiving ratings of 100, 50, & 0. The mean average rating would be 50. However, ratings of 55, 50 & 45 could also result in the same average. The second average might be more trusted because there is more consensus around a particular rating (a lower deviation).
(*In practice, some albums can have several thousand ratings)
This album is rated in the top 7% of all albums on BestEverAlbums.com. This album has a Bayesian average rating of 76.4/100, a mean average of 76.0/100, and a trimmed mean (excluding outliers) of 76.8/100. The standard deviation for this album is 17.1.

Grotesque (After The Gramme) favourites

Grotesque (After The Gramme) comments

i think it's notable that this is the funniest fall album.

A precurser to Hex from 1980, track for track it more or less equals anything in the Fall's cannon, except for the inevitable token out-there experimental track of WMC Blob 59 which doesn't really serve much purpose. There's wonderful wordplay in English Scheme and New Face In Hell, tales of Hitler on speed in Gramme Friday and very dark subject matter in Impression Of J Temperance which make this...well, just your typical Fall album I suppose, but one of their best.

I'm happy to see Grotesque rated so highly here. This captured an early peak for the band that's as compelling to me as Hex Enduction Hour. Even the misteps are idiosyncratic (tape noise, long jams over a riff) and put the last pieces of the quote unquote "Fall Sound" into place.

This is the first truely classic Fall album. One of the five starting points I recommend to the curious.

No greater collection of songs I've ever heard in my life. The Fall of this time are the greatest musical group ever assembled.

Your feedback for Grotesque (After The Gramme)