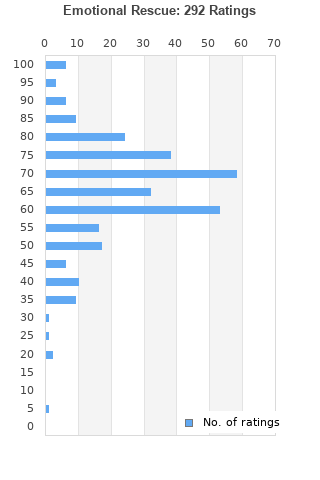 The Rolling Stones - Emotional Rescue Vinyl Record (VG)
Condition: Used
Time left: 1h 32m 14s
Ships to: Worldwide
$15.00
Go to store
Product prices and availability are accurate as of the date indicated and are subject to change. Any price and availability information displayed on the linked website at the time of purchase will apply to the purchase of this product.  See full search results on eBay

Emotional Rescue is ranked 20th best out of 87 albums by The Rolling Stones on BestEverAlbums.com.

The best album by The Rolling Stones is Exile On Main St. which is ranked number 42 in the list of all-time albums with a total rank score of 30,091. 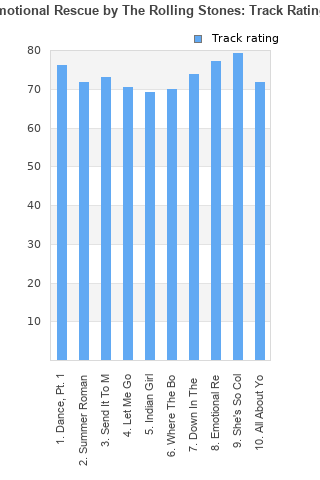 Rating metrics: Outliers can be removed when calculating a mean average to dampen the effects of ratings outside the normal distribution. This figure is provided as the trimmed mean. A high standard deviation can be legitimate, but can sometimes indicate 'gaming' is occurring. Consider a simplified example* of an item receiving ratings of 100, 50, & 0. The mean average rating would be 50. However, ratings of 55, 50 & 45 could also result in the same average. The second average might be more trusted because there is more consensus around a particular rating (a lower deviation).
(*In practice, some albums can have several thousand ratings)
This album has a Bayesian average rating of 66.6/100, a mean average of 65.9/100, and a trimmed mean (excluding outliers) of 66.3/100. The standard deviation for this album is 14.1.

The Stones pretty much fell off the cliff with this one. Sure, they would put out a few more bad albums in the coming decades, but this was when we still had hope for them.

Half the album are pretty good tunes with She's so cold being the best one. Other half are fillers.

Still a good album if you like the Stones.

I have always figured that I was the only one who loves this record. I think people would give it more credit if they thought about how much better it is than the dreck that was soon to come.

After the brilliance of some girls this is a major disappointment. The previous album felt so fresh and vibrant, where emotional rescue sounds stale and lazy. Having said that, about half the album is really good. The title track and down in the hole are excellent. Dance, send it to me and she's so cold are also good but the rest ranges from ok to terrible. The worst track without a doubt is summer romance and where the boys go is nearly just as bad, although it is kind of funny. This album was one of the stones biggest seller's. Strange.

Having dismissed this one for years as the lesser sibling of 'Some Girls' and 'Tattoo You', I think I was unfair in rating this so low. OK it tried to repeat the trick of 'Some Girls' with its punky moments, funk beats and a nod to disco, and doesn't do it quite as well, but it's an enjoyable Stones album. Certainly not to be lumped with their later works that are either just boring (Steel Wheels) or downright disgusting.

Underrated, just happened to fall in between their two latter-period masterpieces so people have always been harsher than necessary.

I think their worst effort in that time period. Solid album, but nothing great comes from it.

Your feedback for Emotional Rescue