Mesopotamia (studio album) by The B-52's 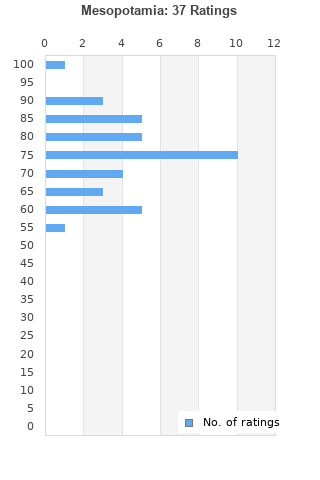 The B 52's Party Mix Mesopotamia Cassette Tape RARE
Condition: Very Good
Time left: 13h 58m 3s
Ships to: Worldwide
$6.60
Go to store
Product prices and availability are accurate as of the date indicated and are subject to change. Any price and availability information displayed on the linked website at the time of purchase will apply to the purchase of this product.  See full search results on eBay

Mesopotamia is ranked 7th best out of 15 albums by The B-52's on BestEverAlbums.com. 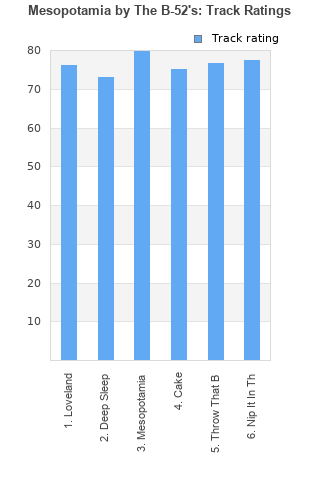 Rating metrics: Outliers can be removed when calculating a mean average to dampen the effects of ratings outside the normal distribution. This figure is provided as the trimmed mean. A high standard deviation can be legitimate, but can sometimes indicate 'gaming' is occurring. Consider a simplified example* of an item receiving ratings of 100, 50, & 0. The mean average rating would be 50. However, ratings of 55, 50 & 45 could also result in the same average. The second average might be more trusted because there is more consensus around a particular rating (a lower deviation).
(*In practice, some albums can have several thousand ratings)
This album is rated in the top 17% of all albums on BestEverAlbums.com. This album has a Bayesian average rating of 75.0/100, a mean average of 75.8/100, and a trimmed mean (excluding outliers) of 75.8/100. The standard deviation for this album is 10.6.

I wish this album got the adulation it deserves, because it's really the most rousing music the B-52s made. I think it helped to have David Byrne in the studio with his unique and probably rather strict conceptual standards. The way "Mesopatamia" and "Cake" build and take you from A to Z is something the B-52s hadn't accomplished except in "Give Me Back Your Man." The other songs just have an amazing, rich sound. Timeless record. ... I bought it when I was in junior high school, I think, and at the time I was disappointed because I thought it didn't have enough of the old B-52s humor. But this was the album that stuck with me over time. It's one for the grownups.

From the almost strained vocals on track one this album I find disappointing, it just shows that bringing two class acts together doesn't always make a class combination.

Ridiculously underrated. Produced by David Byrne at the height of Talking Heads' power, Mesopotamia is the most unique thing The B-52's ever put out. They've had stronger albums as a whole but its still a strong album. In Cake, Cindy and Kate's lyrics make baking a cake way too sensual for words.

Your feedback for Mesopotamia