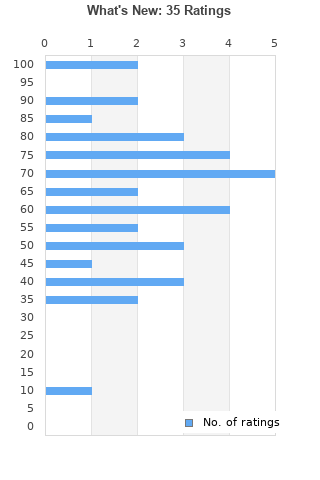 What's New is ranked 3rd best out of 28 albums by Linda Ronstadt on BestEverAlbums.com.

The best album by Linda Ronstadt is Simple Dreams which is ranked number 5454 in the list of all-time albums with a total rank score of 237.

FOR THE LOVE OF LINDA: Honoring The Music of LINDA RONSTADT
Birchmere, Alexandria, United States. 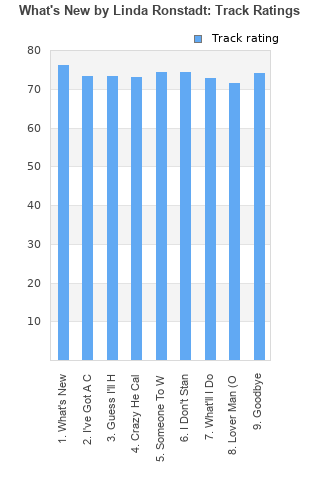 Rating metrics: Outliers can be removed when calculating a mean average to dampen the effects of ratings outside the normal distribution. This figure is provided as the trimmed mean. A high standard deviation can be legitimate, but can sometimes indicate 'gaming' is occurring. Consider a simplified example* of an item receiving ratings of 100, 50, & 0. The mean average rating would be 50. However, ratings of 55, 50 & 45 could also result in the same average. The second average might be more trusted because there is more consensus around a particular rating (a lower deviation).
(*In practice, some albums can have several thousand ratings)
This album has a Bayesian average rating of 67.8/100, a mean average of 65.8/100, and a trimmed mean (excluding outliers) of 65.8/100. The standard deviation for this album is 16.4.

Linda Ronstadt is a well known country/rock singer and released many successful albums during the 70's. This album was one of the first to feature songs from the 1920-50 era that so many singers these days seem to find a need to record and ruin. Linda Ronstadt's versions of these songs are amazing she has a very strong and moving voice and backed by the Nelson Riddle Orchestra brings the songs here to life again. A beautiful late night listen to relax with.

Your feedback for What's New