The Slider (album) by T. Rex 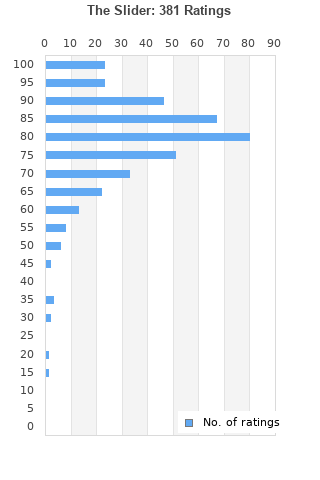 T. Rex The Slider LP Vinyl Album Record 1972 Reprise Records MS 2095
Condition: Used
Time left: 7h 18m 33s
Ships to: Worldwide
$22.00
Go to store
Product prices and availability are accurate as of the date indicated and are subject to change. Any price and availability information displayed on the linked website at the time of purchase will apply to the purchase of this product.  See full search results on eBay

The Slider is ranked 2nd best out of 23 albums by T. Rex on BestEverAlbums.com.

The best album by T. Rex is Electric Warrior which is ranked number 325 in the list of all-time albums with a total rank score of 6,018. 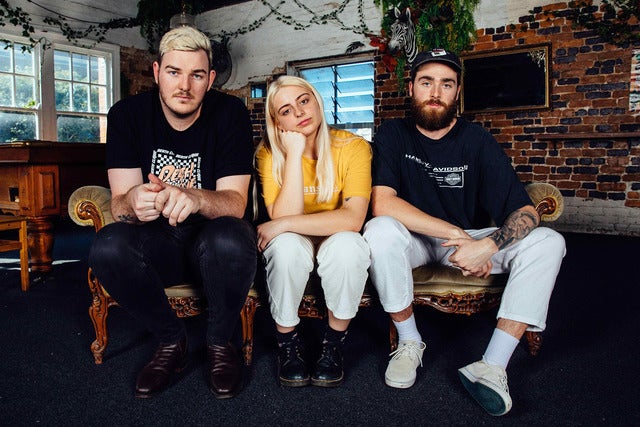 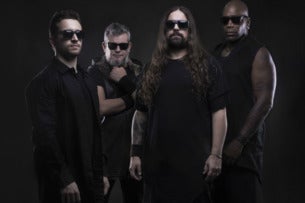 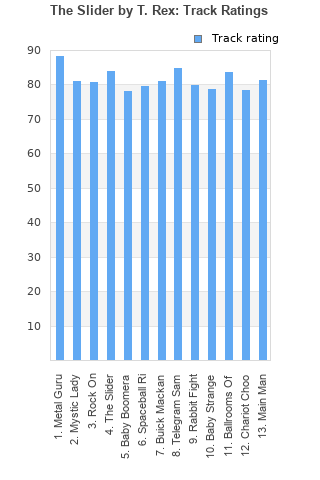 Rating metrics: Outliers can be removed when calculating a mean average to dampen the effects of ratings outside the normal distribution. This figure is provided as the trimmed mean. A high standard deviation can be legitimate, but can sometimes indicate 'gaming' is occurring. Consider a simplified example* of an item receiving ratings of 100, 50, & 0. The mean average rating would be 50. However, ratings of 55, 50 & 45 could also result in the same average. The second average might be more trusted because there is more consensus around a particular rating (a lower deviation).
(*In practice, some albums can have several thousand ratings)
This album is rated in the top 2% of albums on BestEverAlbums.com. This album has a mean average rating of 80.0/100. The trimmed mean (excluding outliers) is 80.9/100. The standard deviation for this album is 12.3.

Outstanding glam rock album from start to finish. They sound like they're having one hell of a good time!

A really fun time for music, and it still hits hard. Very cumbersome.

The second best T.Rex album after, electric warrior. The slider, is another fine record, again featuring some fantastic tracks in, telegram Sam, rock on, and the sublime, metal guru. Great rock'n'roll boogie music.

As colorful a first eight bars of an album as you'll ever hear, and with four funky songs behind it - and then along comes "Baby Boomerang," aimed at... Babies? I'm asking because it certainly wasn't aimed the three decades-old American who just sat listening to it. Also, did they have "Seventeen" magazine in England circa '72? I'm asking because "Spaceball Ricochet" sure seems aimed at that same marketing demographic - which is by way of saying: while I admire Bolan's ability to hit his targets, hearing music aimed like missiles aimed toward specific buying publics, like Sprite commercials, makes "The Slider" (the album, not the song) come off a bit cheap on the whole. Actually, scratch "cheap" - b/c market research don't come... Whether you hire a firm or do it yourself - and b/c the eccentricities bleed through, I'm betting Marc Bolan did it himself. And thank God. Eccentricities redeem songs like "Baby Strange," and push songs like the "Ballrooms of Mars" toward... Transcendence?

Overall, while "Electric Warrior" and "Tanx" come off more authentic, this one has moments that can hang with the best of either of 'em. And that's saying a lot. 85/100

In my opinion this is the third best L.P. by T.Rex. Electric Warrior is a masterpiece and I now rate Tanx higher than The Slider. I can't put my finger on it but The Slider just lacks something that the other two have. Metal Gru, Telegram Sam and the title track are the best songs here followed by Buik MacKane and Chariot Choogle.

"The Slider" was the successor to T. Rex 's perhaps the only truly well-rounded album "Electric Warrior". To a certain extent "The Slider" is more of the same, of course aided by producer Tony Visconti but also by the two great Turtles vocalists Howard Kaylan and Mark Volman who help create the big sound that characterized the T. Rex during this period.

When "The Slider" not quite matches its predecessor's heights, it is primarily because some of the songs do not quite keep the level of "Electric Warrior". But this does not in any way make "The Slider" a weak or uninteresting album - here's plenty to enjoy.

"Metal Guru"and "Telegram Sam"(perhaps a little too much a rip-off of "Get it On ") - are well-known single-hits, and "Rock On ", "Baby Boomerang" and "Main Man " belong among the group's best-known songs.

Among the less typical numbers you'll find some of Bolan's best songs, such as "Ballrooms of Mars, ""The Slider" and "Spaceball Ricochet".

Among the bonus tracks "Thunderwing" is a good number in classic T.Rex arrangement.

Lots of great tunes on this one even his B.sides were as good as his A sides got more for your money with a Bolan Single although I was born this very year most of my favourite tunes come from this era Telegram Sam,Buik Makane,Metal Guru,Rabbit Fighter best here

Album, which contains recognizable hits by T.Rex "Metal Guru" and "Telegram Sam ", but also a fine ballad "Ballroon of the Mars" - is like a lyrical period piece glam rock, Marc Bolan*s moments in pop music sentiments on the ball.

Your feedback for The Slider