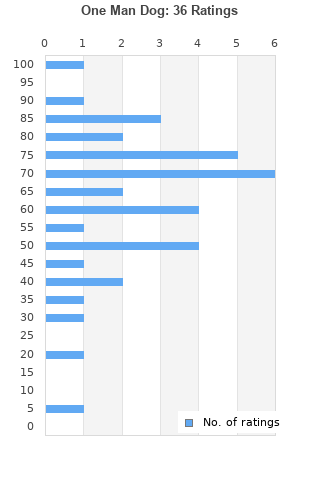 One Man Dog is ranked 3rd best out of 26 albums by James Taylor on BestEverAlbums.com.

The best album by James Taylor is Sweet Baby James which is ranked number 1313 in the list of all-time albums with a total rank score of 1,350. 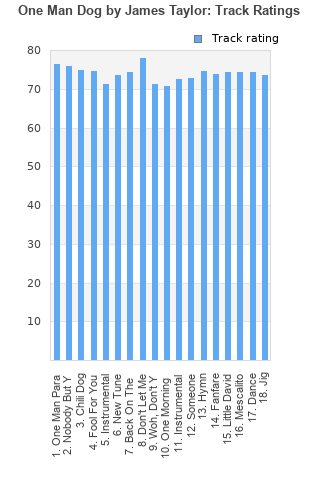 Rating metrics: Outliers can be removed when calculating a mean average to dampen the effects of ratings outside the normal distribution. This figure is provided as the trimmed mean. A high standard deviation can be legitimate, but can sometimes indicate 'gaming' is occurring. Consider a simplified example* of an item receiving ratings of 100, 50, & 0. The mean average rating would be 50. However, ratings of 55, 50 & 45 could also result in the same average. The second average might be more trusted because there is more consensus around a particular rating (a lower deviation).
(*In practice, some albums can have several thousand ratings)
This album has a Bayesian average rating of 66.4/100, a mean average of 64.4/100, and a trimmed mean (excluding outliers) of 64.4/100. The standard deviation for this album is 21.2.

Should be credited to James Taylor & The Section - as the insert shows. (A working (album)-title on this one was apparently "One Man Parade"). (Re)-Mixed with some "new" parts re-recorded for the quadrophonic version of this album. According to Leland Sklar the dog in the boat with JT pictured on the album-cover was James' dog: David (Little David?). Anyways, some do not like this album, but for me this is JT's best album - and a "fun" classic!

Quite a patchy affair, this is James Taylor having a bit of jam with his pals who just happen to be excellent session musicians.

This is why he still created the wonderful Hymn, the oft covered Don't Let Me Be Lonely Tonight and possibly my favourite here, the hidden gem that is New Tune, it could've done with a better title, but everything else about it is sublime, particularly the resigned vocal and the subject matter which is quite possibly Joni Mitchell.

Why make a record if you have so little to say? Way too much bongo in the first half. The songs just kinda thoughtlessly plod along. Some are prettier than others, that's it.

Your feedback for One Man Dog