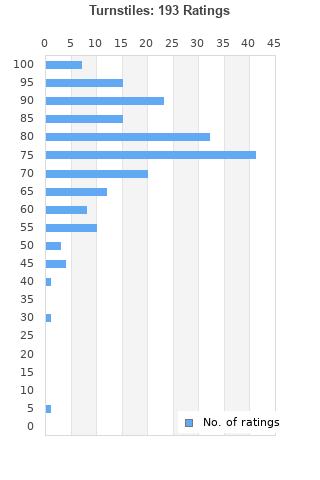 AWESOME BILLY JOEL 11 CASSETTE LOT THE STRANGER 52ND STREET TURNSTILES PIANO MAN
Condition: Like New
Time left: 7h 36m 6s
Ships to: Worldwide
$40.00
Go to store
Product prices and availability are accurate as of the date indicated and are subject to change. Any price and availability information displayed on the linked website at the time of purchase will apply to the purchase of this product.  See full search results on eBay

Turnstiles is ranked 5th best out of 23 albums by Billy Joel on BestEverAlbums.com.

The best album by Billy Joel is The Stranger which is ranked number 275 in the list of all-time albums with a total rank score of 7,143. 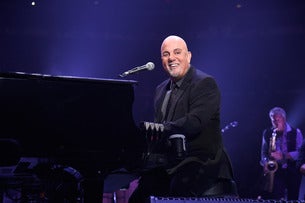 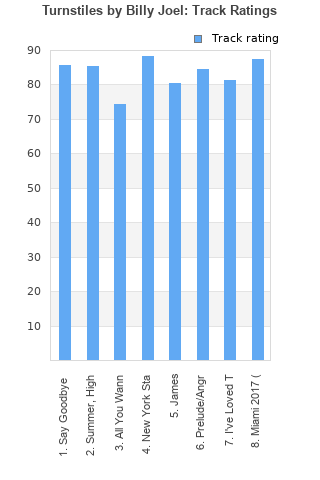 Rating metrics: Outliers can be removed when calculating a mean average to dampen the effects of ratings outside the normal distribution. This figure is provided as the trimmed mean. A high standard deviation can be legitimate, but can sometimes indicate 'gaming' is occurring. Consider a simplified example* of an item receiving ratings of 100, 50, & 0. The mean average rating would be 50. However, ratings of 55, 50 & 45 could also result in the same average. The second average might be more trusted because there is more consensus around a particular rating (a lower deviation).
(*In practice, some albums can have several thousand ratings)
This album is rated in the top 9% of albums on BestEverAlbums.com. This album has a mean average rating of 75.0/100. The trimmed mean (excluding outliers) is 76.1/100. The standard deviation for this album is 14.6.

Turnstiles is one of Billy's greatest albums, with several classic tracks, however, it also has without a doubt the worst song he ever wrote, the mindless, unimpressive sequence of sounds known as "All You Want to do is Dance". Get the album, skip that track.

Other than that though, this is a great album. The A-side is ok, the best track there being 'Summer Highland Falls', some may think of it as a pretentious song, but it's also a very good one. Side A also features the nice 'New York State of Mind' and the great 'Say Goodbye to Hollywood'. Along with the song that shall not be named, of course.

The B-side of this album, however, is absolutely fantastic. The weakest song on this side is the beautiful 'James' and the other 3 tracks are some of Joel's all time best. 'Angry Young Man' is a perfect pop track, 'I've Loved These Days' is a great nostalgia trip and 'Miami 2017' (Though not prophetic) is his best ever rock song.

Although turnstiles, is not one of Billy Joel's best albums, it's certainly very good, and features four of his most memorable songs. Prelude/angry young man, is fantastic, and Joel would open most of his concerts for the large majority of his career with it, quite why it doesn't open the album, only Joel knows. New York state of mind, is obviously great, and now recognised as a true standard. Say goodbye to Hollywood, is Joel's kiss off to L.A, and, Miami (2017), is stunning. Other good tracks are, summer,highland falls, and, I've loved these days. The other two are ok filler. It's a good album, although i do think the production is the main reason the record isn't better. But Joel's next release would be the one to elevate him to superstar status, with his classic album, the stranger.

A consistently great release which is further proof that he is not a singles only artist.

You can't really do wrong with any track here (except maybe All You Wanna Do Is Dance), making this one of Billy Joel's most consistent releases. In fact, this just might be his best album.

Prelude/Angry Young Man is the real stand-out here- it's progressive, along the lines of Scenes From An Italian Restaurant, with virtuosic piano playing and unique choices of melodies and rhythms.

Your feedback for Turnstiles