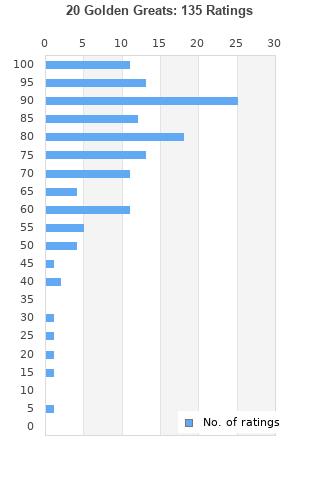 20 Golden Greats is ranked 4th best out of 27 albums by Buddy Holly on BestEverAlbums.com.

The best album by Buddy Holly is Buddy Holly which is ranked number 800 in the list of all-time albums with a total rank score of 2,315. 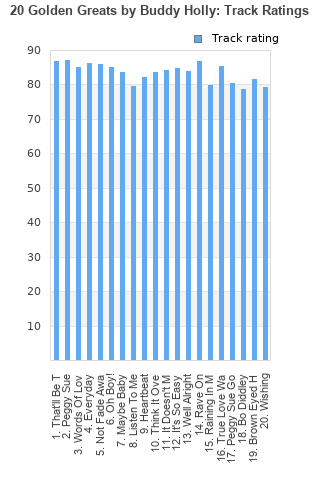 Rating metrics: Outliers can be removed when calculating a mean average to dampen the effects of ratings outside the normal distribution. This figure is provided as the trimmed mean. A high standard deviation can be legitimate, but can sometimes indicate 'gaming' is occurring. Consider a simplified example* of an item receiving ratings of 100, 50, & 0. The mean average rating would be 50. However, ratings of 55, 50 & 45 could also result in the same average. The second average might be more trusted because there is more consensus around a particular rating (a lower deviation).
(*In practice, some albums can have several thousand ratings)
This album is rated in the top 3% of all albums on BestEverAlbums.com. This album has a Bayesian average rating of 78.3/100, a mean average of 77.2/100, and a trimmed mean (excluding outliers) of 78.7/100. The standard deviation for this album is 18.5.

Hard to argue with the number of classics Buddy Holly had written before his untimely death.

Nine Top Ten hits in barely two years and then a fateful flight on a small plane (some claim was called the American Pie) and Buddy Holly entered the realm of rock & roll legend. I consider this album a must have.

One of the first albums purchased from the Columbia House Music Club. Can not believe the amount of classic songs included on the album. It is fantastic to see how many of the songs on this album end up being covers for others.

It's a shame this is out of print now...

GavinB,..I totally agree with you..It would have been great to hear the music he would have made as he matured..I have adored his music since I was 5...The Crickets were the first self contained rock band.

Buddy wrote the most beautifully elegant songs of any rock and roller I've ever heard. I wonder what sort of musician he would have grown into, had he not died in that fateful airplane crash in Clear Lake Iowa at age 23 in 1959. In the two short years since he began recording music, Buddy had already written 2 dozen songs that were destined to become American rock and roll classics. No other first generation American rocker (not even Elvis) ever came close to accomplishing what Buddy did in those two short years as a performing recording artist.

When I was 4, I asked for "Oh boy" 45 for Christmas, although I was obviously too young to really get Buddy Holly or understand what he was all about, I really liked his "hiccup" vocals, the melody, the simplicity of this song and when I was older, around the time when "Born to run" and "Horses" came out, I really starting getting into his music..you can see how much of his music, everly brothers, elvis is in the music of the Beatles. I like to follow the evolution and progression of pop/rock music from the blues to the present.

Your feedback for 20 Golden Greats