All The Lost Souls (studio album) by James Blunt 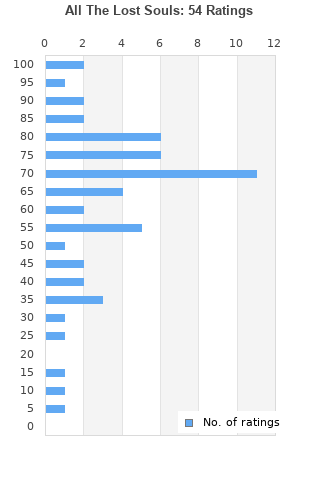 CD ALBUM " JAMES BLUNT " ALL THE LOST SOULS . CONDITION GOOD.
Condition: Good
Time left: 6h 27m 56s
Ships to: Worldwide
£1.30
Go to store
Product prices and availability are accurate as of the date indicated and are subject to change. Any price and availability information displayed on the linked website at the time of purchase will apply to the purchase of this product.  See full search results on eBay

All The Lost Souls is ranked 2nd best out of 7 albums by James Blunt on BestEverAlbums.com.

The best album by James Blunt is Back To Bedlam which is ranked number 3353 in the list of all-time albums with a total rank score of 439. 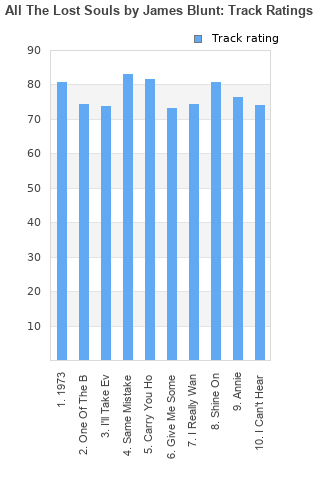 All The Lost Souls rankings

All The Lost Souls collection

All The Lost Souls ratings

Rating metrics: Outliers can be removed when calculating a mean average to dampen the effects of ratings outside the normal distribution. This figure is provided as the trimmed mean. A high standard deviation can be legitimate, but can sometimes indicate 'gaming' is occurring. Consider a simplified example* of an item receiving ratings of 100, 50, & 0. The mean average rating would be 50. However, ratings of 55, 50 & 45 could also result in the same average. The second average might be more trusted because there is more consensus around a particular rating (a lower deviation).
(*In practice, some albums can have several thousand ratings)
This album has a Bayesian average rating of 63.6/100, a mean average of 61.7/100, and a trimmed mean (excluding outliers) of 61.7/100. The standard deviation for this album is 22.9.

All The Lost Souls favourites

All The Lost Souls comments

An honest album with 4/5 really good songs.
It deserves to stay in the year chart.

I don't care that you hate this guy, this is a decent album. I'm even going to say that this is better than Back to Bedlam. "Carry You Home", "Same Mistake" and "Shine On" are good songs. I'm going to get over this and stop calling it my guilty pleasure.

It's a good album.

Oooor maybe it's just sentimental-me speaking, seeing as I grew up with this and "Carry You Home" really hits me as it reminds me of my late grandmother (had it playing in the car when visiting her in the hospital).

I still think it's a good album.

Some decent poppy songs with two stand out tracks "shine on" and "same mistake" make this album ridiculously underrated on this site....

Your feedback for All The Lost Souls