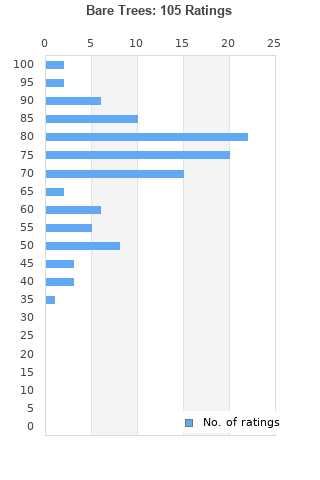 Bare Trees is ranked 12th best out of 38 albums by Fleetwood Mac on BestEverAlbums.com.

The best album by Fleetwood Mac is Rumours which is ranked number 27 in the list of all-time albums with a total rank score of 37,510. 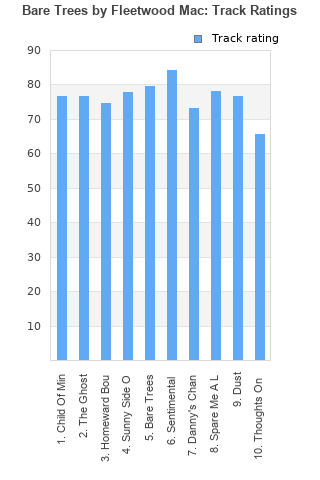 Rating metrics: Outliers can be removed when calculating a mean average to dampen the effects of ratings outside the normal distribution. This figure is provided as the trimmed mean. A high standard deviation can be legitimate, but can sometimes indicate 'gaming' is occurring. Consider a simplified example* of an item receiving ratings of 100, 50, & 0. The mean average rating would be 50. However, ratings of 55, 50 & 45 could also result in the same average. The second average might be more trusted because there is more consensus around a particular rating (a lower deviation).
(*In practice, some albums can have several thousand ratings)
This album has a Bayesian average rating of 72.0/100, a mean average of 71.9/100, and a trimmed mean (excluding outliers) of 71.9/100. The standard deviation for this album is 13.7.

An overlooked gem. I agree with JuJu83 this is the best post Green pre- Buckingham /Nicks album. Again excellent guitar work from Danny Kirwan. He was just as good as Buckingham and almost as good as Green. Child of Mine is an roaring opener. Christine McVie chips in with her usual likeable pop and Welch's Ghost is full of weirdness.

I've always thought this was a very solid, if not spectacular, album. It is low-key, as subtle as the album cover artwork. Highpoints (IMHO) include the title track, "Spare Me A Little...", "Child Of Mine". I've had this one since the days of vinyl, and it still gets played.

Interesting as the place for the original version of Sentimental Lady. But otherwise pretty forgettable.

Quite good album on their way from blues to the perfect pop of "Rumours".

The lowest point in the four year slump between Then Play On and Mystery to Me.

"Bare Trees" is the best album from the post-Peter Green, pre-Buckingham/Nicks Fleetwood Mac.

Bob Welch's "Sentimental Lady" is one of the hook-iest songs ever written - forget that it's "soft," singer/songwriter rock, and marvel at the song's craftsmanship.

That Welch was inexplicably snubbed from Fleetwood Mac Hall of Fame induction is shameful. "Bare Trees," (as well as "heroes") proves Welch to be a major talent.

Your feedback for Bare Trees