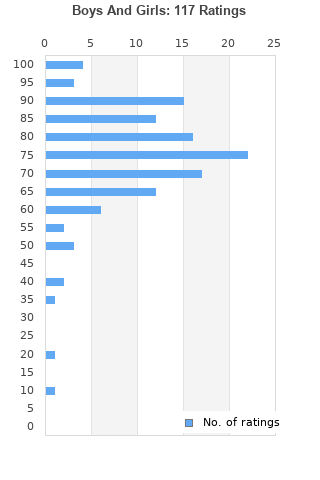 Bryan Ferry - Boys and Girls - CD - New
Condition: Brand New
Time left: 2h 57m 56s
Ships to: Worldwide
£8.58
Go to store
Product prices and availability are accurate as of the date indicated and are subject to change. Any price and availability information displayed on the linked website at the time of purchase will apply to the purchase of this product.  See full search results on eBay

Boys And Girls is ranked as the best album by Bryan Ferry. 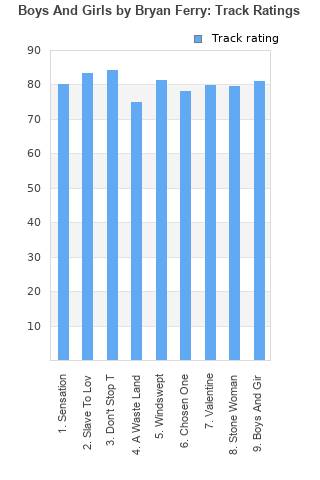 Rating metrics: Outliers can be removed when calculating a mean average to dampen the effects of ratings outside the normal distribution. This figure is provided as the trimmed mean. A high standard deviation can be legitimate, but can sometimes indicate 'gaming' is occurring. Consider a simplified example* of an item receiving ratings of 100, 50, & 0. The mean average rating would be 50. However, ratings of 55, 50 & 45 could also result in the same average. The second average might be more trusted because there is more consensus around a particular rating (a lower deviation).
(*In practice, some albums can have several thousand ratings)
This album is rated in the top 14% of all albums on BestEverAlbums.com. This album has a Bayesian average rating of 75.3/100, a mean average of 74.3/100, and a trimmed mean (excluding outliers) of 75.5/100. The standard deviation for this album is 15.0.

I got this album completely wrong the first time around. It took me a while to get into this because the album is mainly based on grooves and feel rather than out and out melody. The melodies themselves are discreet but repeated listens brings them to the fore. All in all, it's a beautiful record and is really the companion album to Roxy music's, Avalon. In fact you could stick the Roxy moniker on the sleeve and I doubt many would have noticed anything different. Still, grear eighties pop record that has stood the test of time.

A beautiful journey into sensuality, Bryan ferry delivers so much in only nine tracks.

A bit safe to be honest, but, slave to love, is an absolute classic, Bryan Ferry's greatest solo song. The rest is okay, a bit like, manifesto, and, flesh + blood, the two Roxy music albums that went down this sonic road. Okay, I suppose, just a bit forgettable.

Highlight include Mark Knopfers appearance on the beautiful brooding reggae "Valentine", Sensation, and Stone Woman. Groove on this record is a stand out, as well as the bassline, Ferry's wavery vocals, and the banshee-like soul backup singers.

An Ok solo record from Mr. Ferry. The production is over wrought and confusing. The material is a bit weak, the overall album just makes me feel so what?

Somewhat reminiscent of Avalon, nowhere near as complete and fulfilling, this is still a great album by Ferry. It has a lushness and personality. Understandable how this would not be to everyone's liking, even a Roxy fan.

somehow this is a difficult record to me. on the one hand i can listen to it easily without being annoyed. (slave to love is a all-time favourite to me) on the other hand it annoys me. this "oversexed" and unagitated prog-pop style feels like a representative, who calls every day, to get the signature under the contract.

A great first solo album very much in the 'Avalon' mould from Roxy Music being rhythmical, dark and layered.

Your feedback for Boys And Girls