Most Messed Up (studio album) by Old 97's 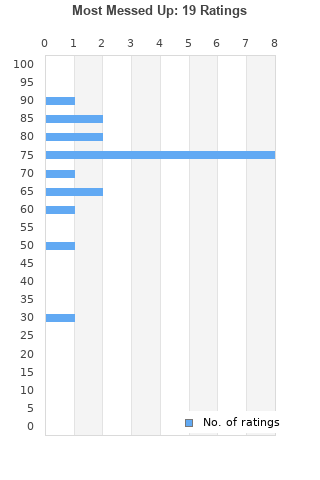 Old 97's - Most Messed Up [New CD]
Condition: Brand New
Time left: 4d 4h 42s
Ships to: Worldwide
$22.44
Go to store
Product prices and availability are accurate as of the date indicated and are subject to change. Any price and availability information displayed on the linked website at the time of purchase will apply to the purchase of this product.  See full search results on eBay

Most Messed Up is ranked 5th best out of 13 albums by Old 97's on BestEverAlbums.com.

The best album by Old 97's is Too Far To Care which is ranked number 3494 in the list of all-time albums with a total rank score of 411. 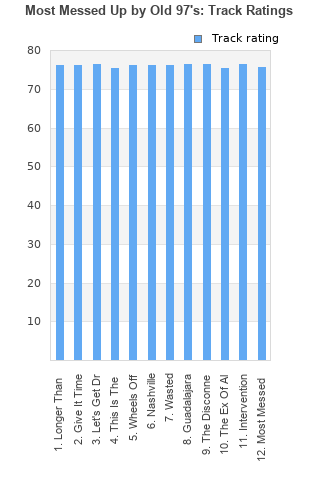 Most Messed Up rankings

Most Messed Up collection

Most Messed Up ratings

Rating metrics: Outliers can be removed when calculating a mean average to dampen the effects of ratings outside the normal distribution. This figure is provided as the trimmed mean. A high standard deviation can be legitimate, but can sometimes indicate 'gaming' is occurring. Consider a simplified example* of an item receiving ratings of 100, 50, & 0. The mean average rating would be 50. However, ratings of 55, 50 & 45 could also result in the same average. The second average might be more trusted because there is more consensus around a particular rating (a lower deviation).
(*In practice, some albums can have several thousand ratings)
This album has a Bayesian average rating of 72.9/100, a mean average of 72.8/100, and a trimmed mean (excluding outliers) of 72.8/100. The standard deviation for this album is 9.7.

Most Messed Up favourites

Most Messed Up comments

Even a below-average Old 97's album is going to be a well above-average album by the standards of most any other artist. They are among the pioneers of the nineties alt-country movement, and their lead singer and songwriter, Rhett Miller, is among the most articulate defenders of independent, creative, non-corporate music making in the whole industry. I think it's important to the remember that, even in their heyday, the Old 97's were never really about brilliant songwriting, but rather the raucous joy of music making and performing. In that way Most Messed Up sounds a bit like a comeback, especially on "Guadalajara," the tale of a businessman tempted by a woman losing her bikini top. Not exactly heady, reflective stuff, but still a hell of a lot of fun.

This is my favorite old 97's since "blame it on gravity" made 2008's top 10. It's an alt-country-inflected rocker that's a lot of fun as a result of being messed up. A lot of these songs are about drinking (whiskey, malt liquor, whatever), getting laid and simply letting loose, which are subjects that come natural to these guys as these songs are a lot of fun to rock to.

Your feedback for Most Messed Up