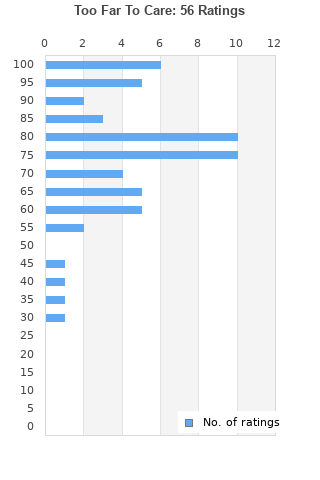 Old 97's ‎: Too Far To Care (CD Promo 1997, Elektra) *Very Good*
Condition: Very Good
Time left: 7d 19h 14m 34s
Ships to: Worldwide
$12.59
Go to store
Product prices and availability are accurate as of the date indicated and are subject to change. Any price and availability information displayed on the linked website at the time of purchase will apply to the purchase of this product.  See full search results on eBay

Too Far To Care is ranked as the best album by Old 97's. 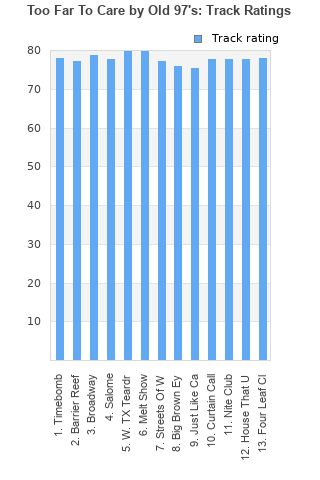 Too Far To Care rankings

Too Far To Care collection

Too Far To Care ratings

Rating metrics: Outliers can be removed when calculating a mean average to dampen the effects of ratings outside the normal distribution. This figure is provided as the trimmed mean. A high standard deviation can be legitimate, but can sometimes indicate 'gaming' is occurring. Consider a simplified example* of an item receiving ratings of 100, 50, & 0. The mean average rating would be 50. However, ratings of 55, 50 & 45 could also result in the same average. The second average might be more trusted because there is more consensus around a particular rating (a lower deviation).
(*In practice, some albums can have several thousand ratings)
This album is rated in the top 17% of all albums on BestEverAlbums.com. This album has a Bayesian average rating of 75.0/100, a mean average of 75.3/100, and a trimmed mean (excluding outliers) of 75.3/100. The standard deviation for this album is 17.3.

Too Far To Care favourites

Too Far To Care comments

Hearing Exene of Four Leaf Clover made me sit up and say, "What?" Then I listened to the rest. it's one of those albums that never seems to leave me. Time Bomb" and "Night Club" are my favorites. "Solome" is a heartbreaker with the incredibel line, "It's over now/ and so are we/ my blood's turned to dirt, girl/you've wrecked every part of me." Ouch!

Too Far to Care combines alt-country and surf rock in a way that feels loose and spontaneous, with Rhett Miller's lyrics sounding plausibly like they could have been written on the back of a cocktail napkin. But this album is far from sloppy or unfocused. The band, pushed along by Ken Bethea’s gonzo guitar licks and Philip Peeple’s insistent drumming, manages a coherent whole here that is by turns comical and genuinely affecting. My favorite track here is the hopelessly combustive "Four Leaf Clover," a reworking of a song from their debut album Hitchhike to Rhome, featuring a fantastic guest appearance by former X frontwoman Exene Cervenka.

Your feedback for Too Far To Care