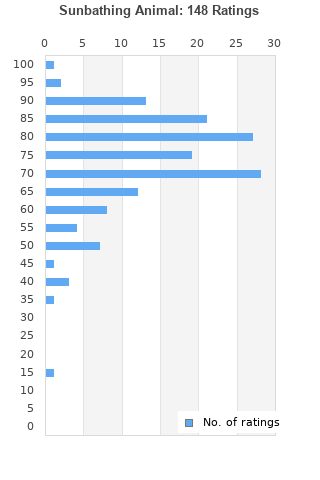 PARQUET COURTS - Sunbathing Animal - Vinyl (gatefold LP)
Condition: New
Time left: 20h 25m 26s
Ships to: Worldwide
£18.98
Go to store
Product prices and availability are accurate as of the date indicated and are subject to change. Any price and availability information displayed on the linked website at the time of purchase will apply to the purchase of this product.  See full search results on eBay

Sunbathing Animal is ranked 4th best out of 8 albums by Parquet Courts on BestEverAlbums.com.

The best album by Parquet Courts is Wide Awake! which is ranked number 678 in the list of all-time albums with a total rank score of 2,811. 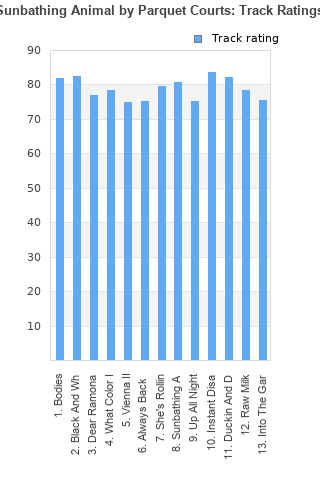 Rating metrics: Outliers can be removed when calculating a mean average to dampen the effects of ratings outside the normal distribution. This figure is provided as the trimmed mean. A high standard deviation can be legitimate, but can sometimes indicate 'gaming' is occurring. Consider a simplified example* of an item receiving ratings of 100, 50, & 0. The mean average rating would be 50. However, ratings of 55, 50 & 45 could also result in the same average. The second average might be more trusted because there is more consensus around a particular rating (a lower deviation).
(*In practice, some albums can have several thousand ratings)
This album has a Bayesian average rating of 74.0/100, a mean average of 73.7/100, and a trimmed mean (excluding outliers) of 74.1/100. The standard deviation for this album is 12.9.

In his review of Sunbathing Animal for Pitchfork, Larry Fitzmaurice describes "She's Rolling," the album's best track, as a "molasses-tumble." I can't honestly say I know what that means, except to say it's a song, and indeed an album as a whole, that is simultaneously difficult and smooth. "The guitar work," Fitzmaurice continues, "courtesy of co-frontmen Savage and Austin Brown, is clever and accomplished without being too showy; in their hands, the instruments squeak, saunter, and roar, sometimes simultaneously." Yes, and that's what is so fun and exhilirating about the distinctly urban rock stylings of Parquet Courts.

It's a great follow up to Light Up Gold, even if not as catchy first. The more you listen, the better it gets.

Another album to file under "raw rock records that imimesis dug hard in 2014 for no apparent reason other than the fact that rock music needed to be appreciated".

I played this album as much as any other release from last year, so even though I don't think it's the technical "best album of the year," I do really enjoy listening to it.

Really solid follow up to Light Up Gold, though it shouldnt be compared to its predecessor. Both are completely different albums with individual strengths. Sunbathing Animal's strength lies within its jamming-instrumentation and witty songwriting. Sunbathing Animal and Instant Dissassembly are instant standouts, with both harbouring sounds of the past whilst still sounding fresh and original.
Underrated band.

another one of those rock albums that sounds like it's from the 90's that everyone likes.

Your feedback for Sunbathing Animal