A Brief History Of Love (studio album) by The Big Pink 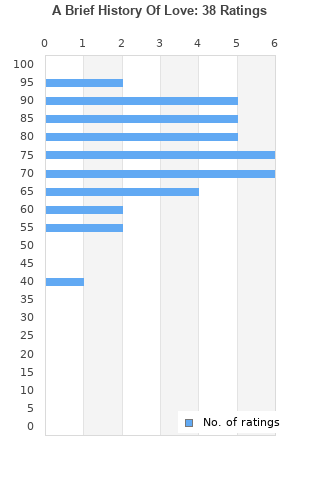 A Brief History Of Love is ranked as the best album by The Big Pink.

Listen to A Brief History Of Love on YouTube 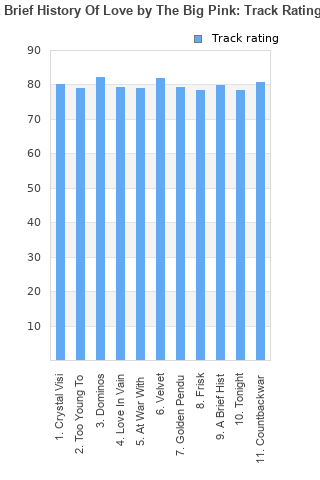 A Brief History Of Love rankings

A Brief History Of Love collection

A Brief History Of Love ratings

Rating metrics: Outliers can be removed when calculating a mean average to dampen the effects of ratings outside the normal distribution. This figure is provided as the trimmed mean. A high standard deviation can be legitimate, but can sometimes indicate 'gaming' is occurring. Consider a simplified example* of an item receiving ratings of 100, 50, & 0. The mean average rating would be 50. However, ratings of 55, 50 & 45 could also result in the same average. The second average might be more trusted because there is more consensus around a particular rating (a lower deviation).
(*In practice, some albums can have several thousand ratings)
This album is rated in the top 13% of all albums on BestEverAlbums.com. This album has a Bayesian average rating of 75.1/100, a mean average of 75.7/100, and a trimmed mean (excluding outliers) of 75.7/100. The standard deviation for this album is 12.1.

A Brief History Of Love favourites

A Brief History Of Love comments

Not bad, but have to agree with other users that it's not the most original of records to be released but they do have a knack with big catchy chorus's.

Quite suprised! I enjoyed this

I dont understand some of the negativity towards this album, its better then most of the crap thats come out in the last 5 years

There's Nothing here perhaps that you won't have heard before, it sounds by turns remeniscent of 80s band sounds, 90s bands... with particular echoes of Sonic youth and Spiritualized, (but I'm usually wrong about these things) But basically, I can't stop playing it. Big and dreamy, occasionally nightmarish- the opening of Golden Pendulum sounds like Aphex twin's come to daddy.
I need a little time to pass to be sure this is not a minor infatuation, but not only can I see this making an appearence on my chart, but actually climbing fast!

Your feedback for A Brief History Of Love