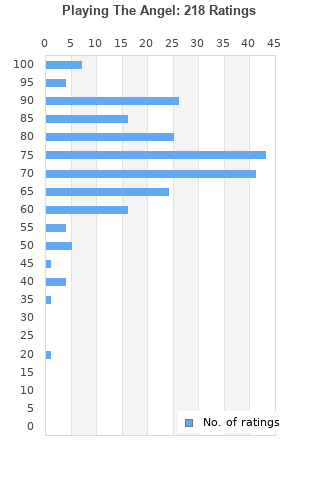 Depeche Mode Playing The Angel Blu-spec CD2 Japan Edition
Condition: New
Time left: 13h 44m 40s
Ships to: Worldwide
$45.00
Go to store
Product prices and availability are accurate as of the date indicated and are subject to change. Any price and availability information displayed on the linked website at the time of purchase will apply to the purchase of this product.  See full search results on eBay

Playing The Angel is ranked 7th best out of 40 albums by Depeche Mode on BestEverAlbums.com.

The best album by Depeche Mode is Violator which is ranked number 128 in the list of all-time albums with a total rank score of 13,855. 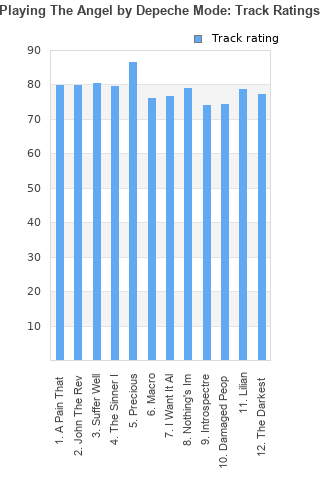 Rating metrics: Outliers can be removed when calculating a mean average to dampen the effects of ratings outside the normal distribution. This figure is provided as the trimmed mean. A high standard deviation can be legitimate, but can sometimes indicate 'gaming' is occurring. Consider a simplified example* of an item receiving ratings of 100, 50, & 0. The mean average rating would be 50. However, ratings of 55, 50 & 45 could also result in the same average. The second average might be more trusted because there is more consensus around a particular rating (a lower deviation).
(*In practice, some albums can have several thousand ratings)
This album has a Bayesian average rating of 74.2/100, a mean average of 74.0/100, and a trimmed mean (excluding outliers) of 74.3/100. The standard deviation for this album is 13.2.

Hugely underrated. One of, if not, their best album. Strong from start to finish, the complete Depeche Mode sound.

An amazing return to form, Playing the angel shows Depeche mode still has power in its later years. This album captures themes of restructuring life after personal failure and tragedy.

One of those Depeche Mode albums that starts strongly but runs out of steam towards the end. Playing The angel, sees the band trying hard, and some of it works fine in, John the revelator(based on an old blues song), suffer well, and, precious. Maybe the album could have been shortened by a couple of tracks down to ten. Still, when it's good, playing the angel, is fine, but it's just not often enough.

A bloody great album that deserves a listen

A great album; better than anything U2 or R.E.M. have done this century. Precious might be their best single since Enjoy the Silence.

one of the best albums of Depeche Mode

A few moments of brilliance, but it feels somewhat uninspired. This album was really good the first time I heard it but never again.

Your feedback for Playing The Angel