Masters Of The Universe (studio album) by Binary Star 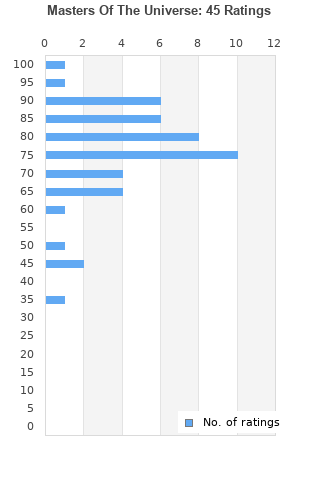 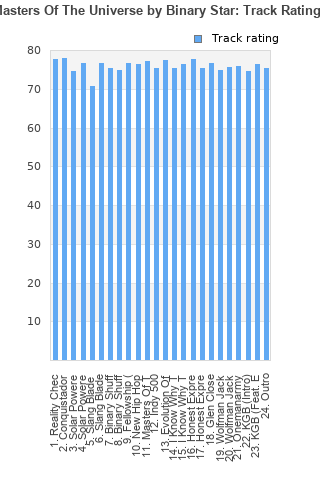 Masters Of The Universe rankings

Masters Of The Universe collection

Masters Of The Universe ratings

Rating metrics: Outliers can be removed when calculating a mean average to dampen the effects of ratings outside the normal distribution. This figure is provided as the trimmed mean. A high standard deviation can be legitimate, but can sometimes indicate 'gaming' is occurring. Consider a simplified example* of an item receiving ratings of 100, 50, & 0. The mean average rating would be 50. However, ratings of 55, 50 & 45 could also result in the same average. The second average might be more trusted because there is more consensus around a particular rating (a lower deviation).
(*In practice, some albums can have several thousand ratings)
This album is rated in the top 5% of all albums on BestEverAlbums.com. This album has a Bayesian average rating of 76.9/100, a mean average of 76.8/100, and a trimmed mean (excluding outliers) of 77.8/100. The standard deviation for this album is 12.3.

Masters Of The Universe favourites

Masters Of The Universe comments

Too many tracks BUT that is some amazing alternative/underground hip hop.

Binary Star - Masters of the Universe is an album I had loved for a (admittedly short) period of time, but had somehow totally forgotten its existence in the meantime, this felt almost like a first listen. At that point, they were such a promising duo, it's a shame they didn't move on to even greater things. What I like the most about this album are the vibes it creates. It's like you are there as it happens, hanging around with them and having so much fun without a care in the world, there's no distance between the artist and the audience, he (they) is one of us. I associate this achievement mainly with the production - it understands that's what it does best and it doesn't pretend to be anything else, simple and effective - but the rapping is nothing short of fantastic (in the context I described above) as well. The intros that preceed some of the tracks-doesn't matter if they are separate tracks like in Solar Powered/Slang Blade/Binary Shuffle or incorporated in the "actual" song like in Indy 500 or Evolution of Man - are also a contributing factor, the spoken words create a friendly environment. I've never had a problem with an album being too long, but here it seems to be one of the cases the length actually works in its favor, you get to know them better and it keeps improving as time passes. Last but not least, the lyrics are also filled with great lines, a typical example is the first verse of the first track, one of the best ways to introduce yourself ("This is how I represent, I rock the mic 110 percent It's intimate, I keeps the party movin' like an immigrant Binary Star, superstar, it's no coincidence Every verse is intricate, this ain't a circus in a tent We don't get down like them clown and the kids I'm used to being indigent, who said it's all about the Benjamins? I want a fortune, I wanna make music and hit the lottery Fortunately, my music is never watery That's how it's gotta be as far as I can see Maybe you should grab a telescope to see my view, it's like astronomy It ain't all about economy So the fact that all these wack emcees is making G's don't bother me Honestly, my number one policy is quality Never sell my soul is my philosophy High velocity, lyrics like Nostrodamus makin' prophecy").

Your feedback for Masters Of The Universe