A Storm In Heaven (studio album) by The Verve 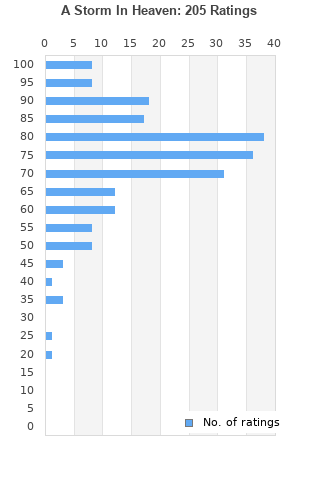 THE VERVE - A STORM IN HEAVEN rare promo cassette - as pictured
Condition: Very Good
Time left: 19h 3m 42s
Ships to: Worldwide
$100.00
Go to store
Product prices and availability are accurate as of the date indicated and are subject to change. Any price and availability information displayed on the linked website at the time of purchase will apply to the purchase of this product.  See full search results on eBay

A Storm In Heaven is ranked 3rd best out of 7 albums by The Verve on BestEverAlbums.com.

The best album by The Verve is Urban Hymns which is ranked number 283 in the list of all-time albums with a total rank score of 6,909. 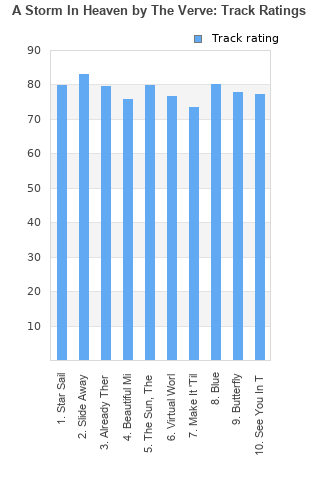 A Storm In Heaven rankings

A Storm In Heaven collection

A Storm In Heaven ratings

Rating metrics: Outliers can be removed when calculating a mean average to dampen the effects of ratings outside the normal distribution. This figure is provided as the trimmed mean. A high standard deviation can be legitimate, but can sometimes indicate 'gaming' is occurring. Consider a simplified example* of an item receiving ratings of 100, 50, & 0. The mean average rating would be 50. However, ratings of 55, 50 & 45 could also result in the same average. The second average might be more trusted because there is more consensus around a particular rating (a lower deviation).
(*In practice, some albums can have several thousand ratings)
This album has a Bayesian average rating of 74.4/100, a mean average of 74.5/100, and a trimmed mean (excluding outliers) of 74.5/100. The standard deviation for this album is 13.4.

A Storm In Heaven favourites

A Storm In Heaven comments

I rated this only 55/100 after first hearing it a few years ago - it was an unfair judgement and I realised I was looking for more like Urban Hymns and not expecting this whimsical shoegaze / psychedelic outing. I've just given it a re-listen and need to reappraise my score up to 70 at least and will give it a bit more attention going forward

Nice listen from beginning to end. 8/10.

I have never delved into The Verve’s discography as I didn’t feel like their style of rock was particularly game-changing on Urban Humns (which is still a very good album). But having now given this album a crack I’m actually really enjoying the atmospheric psychedelic soundscapes here. There seems to be so much more potential to have been explored and they may have played it a bit safe with UH. Now I’m off to give their second album a crack too.

First 3 tracks are great. Blue and Butterfly are ok. The rest don't do anything for me

I always wondered if anyone ever blended psychedelic rock and shoegaze, because those are my two favorites.
Well, here it is, and it's wonderful

That lovely haunting airy sound that was all but gone by the time Urban Hymns came around. And Graeme2 is right about their previous work, it really needs to be heard.

My favourite album of all time. Track-by-track review with a rating for each track out of 100:

Star Sail: A dreamy opener with guitar that simultaneously floats dreamily and roars loudly. Ashcroft's vocals soar. 93
Slide Away: The album's first and catchiest single, though not as ambient and dreamy as some of the other highlights. Deserved more than the mild attention it got, it's a track in awe of the endless soundscape it's perusing. 94
Already There: The album's first masterpiece and one of Verve's finest tracks, from the solitary opening strums which ooze sadness, to Ashcroft's mournful vocals edging the song to a heavenly place. When McCabe's guitar kicks in and gets the track pumping, it's like floating away to an unknown destination. And you don't want to leave. 100
Beautiful Mind: A massively expansive head-trip, a stumble into a blue abyss. A song filled with emotions fleeing and dreams fleeting. McCabe's guitar strums echo and reverberate, moving all around, bouncing off walls of sound. The final haunting strums that close the song are some of the saddest sounds I've ever heard from a guitar. 98
The Sun, The Sea: The first half of the album closes loudly as Ashcroft croons and pleads. The energy here makes the song loud and fast enough to have been a single and as the whole thing descends into a chaotic mess, saxophones sighing and Ashcroft fading away. 94
Virtual World: To me personally, the opening sounds of Virtual World are iconic. I feel like I've heard them all my life and they haunt my skull each time they float through it. It is one of the purest expressions of happiness, head out the window of a speeding car, smile brushing the breeze like old friends meeting again. 100
Make It Till Monday: An almost scary awakening from a dream within a nightmare (or perhaps the other way round), the shortest track on Storm tells of a drug-fuelled weekend burning away into oblivion and leaving behind nothing but regret. I really hope they do make it. 98
Blue: To say the lead single from Storm is my least favourite track on the album isn't really saying much because it is still a very solid track, despite the fact I'm not the hugest fan of the pre-Urban Hymns pop/rock sound (at least, not on this album where it seems curiously out-of-place) or the catchy 'swallow you' lyric. Still, it's a decent track and a brief but lovely listen. Also, it contains the fantastic lyric "You shot him down, there's blood on my face, his heart's in the right place." 92
Butterfly: What, really, can I say about what's probably my favourite song of all time? That it meshes saxophone and guitar so beautifully to describe it as anything less than orgasmic is insulting? That Ashcroft's poetic lyrics and snarling delivery are so beautifully crafted that my eyes moisten at the thought and shivers run down at the experience? That he can create one of the scariest sounds in the world simply by moaning the titular 'butterflyyyyy'? If the guitar stumbling to a halt at 1:14 isn't enough to blow your mind, listen to Ashcroft scream 'butterfly' four times at 1:46, or better yet, the countless guitar screeches around the 5-minute mark that absolutely jolt you awake and make you feel like your whole body is about to implode, the saxophone howl inviting warmly your newly freed organs to float around around the zero-gravity playground? Butterfly, for me, was a landmark musical experience, and a criminally underrated one at that. To listen is to experience musical emotion and evocativeness at its peak. It's a marvel. 100
See You In The Next One (Have A Good Time): Displaying all too endearingly keenly the sadness of saying goodbye to a loved one without being hackneyed or over-the-top, See You In The Next One expresses in bitter words the feeling of loss at its heart: "I liked the way it was. I hate the way it is now." That's really all there is to it. So sad it rips your heart open and the tears feel as if they may never stop flowing. 100

Key Tracks: Already There, Virtual World, Butterfly, See You In The Next One

Yeah I too expected some comments thats why I came here.By the way.Im surprised by your rating.The album is a really brilliant piece of work it can even equal Urban Hymns

It took them so long to get a first comment on this album!? I thought this was considered popular. I like Slide Away.

Your feedback for A Storm In Heaven