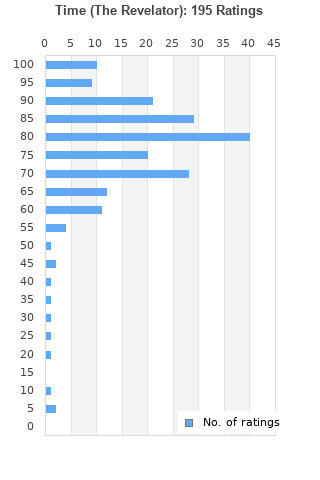 Time [The Revelator]
Condition: Acceptable
Time left: 3d 17h 56m 58s
Ships to: Worldwide
$5.69
Go to store
Product prices and availability are accurate as of the date indicated and are subject to change. Any price and availability information displayed on the linked website at the time of purchase will apply to the purchase of this product.  See full search results on eBay

Time (The Revelator) is ranked as the best album by Gillian Welch. 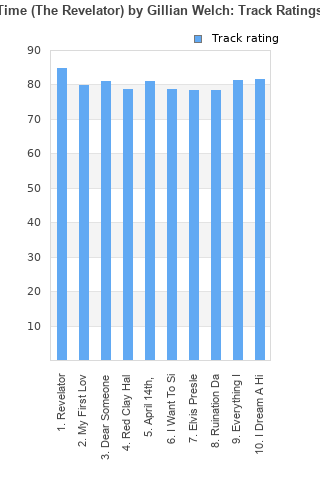 Rating metrics: Outliers can be removed when calculating a mean average to dampen the effects of ratings outside the normal distribution. This figure is provided as the trimmed mean. A high standard deviation can be legitimate, but can sometimes indicate 'gaming' is occurring. Consider a simplified example* of an item receiving ratings of 100, 50, & 0. The mean average rating would be 50. However, ratings of 55, 50 & 45 could also result in the same average. The second average might be more trusted because there is more consensus around a particular rating (a lower deviation).
(*In practice, some albums can have several thousand ratings)
This album is rated in the top 3% of all albums on BestEverAlbums.com. This album has a Bayesian average rating of 77.9/100, a mean average of 76.3/100, and a trimmed mean (excluding outliers) of 78.2/100. The standard deviation for this album is 16.4.

Prob my favorite album ever. This and Hejira are my personal favorite folk type albums. Can't really explain it except to say they give me a special feeling that I don't get with other similar albums. Really a great selection of amazing songwriting and harmony.

This is not an album I would listen to with full attention-maybe I should, as I randomly caught some interesting lines-, but as background music it's extremely effective. Simple and relaxing vocals/guitar, just what the doctor ordered after a tiring and stressful day. Another thing I liked is how balanced it is. It is clearly influenced by everything that preceeded it, but not too much, it has a modern vibe too. I am reasonably confident I could approximately guess when it came out hadn't I already known it, which is usually tricky in this genre. One complaint would be that the opening track sets the bar a bit too high and the rest of the album struggles to catch up. Still, no moments where I felt it dragged or it got dull, even the last track was ok despite my initial fear that it would be too long,

Plenty listenable, but not something I imagine myself choosing to listen to again.

A lovely lo-fi country record. Time, sees Gillian Welch and partner Dave Rawlings producing an intimate acoustic LP full of excellent songs. Standouts include, my first love, dear someone, relevator, April 14th, and although it goes for the epic, I find the last track, I dream a highway, ridiculously overlong and a bit boring. Still, a very good album. Beautiful ghostly Americana.

Gillian Welch and Dave Rawlings seem to really understand pitch, and utilize flatness and sharpness to provoke emotion. Give this a couple of listens to.

Parts of this glow like an ember on a fire on a chilly frosty night. The title track is sublime as it hauntingly weaves itself into your soul. It is spellbinding stuff. I'm captured by the arresting vocal and the riveting guitar-work. 'Everything is Free' is just as beautifully simple as it is simply beautiful in its execution. Bravo!

Anyone who thinks they don't make good country anymore hasn't been listening to Gillian Welch. This is as good a collection of country songs as has ever been recorded.

Your feedback for Time (The Revelator)