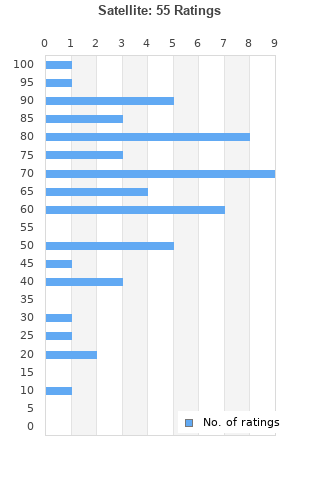 POD-Satellite - CD - 2001 Atlantic - (GOOD condition)
Condition: Good
Time left: 1d 4h 12m 52s
Ships to: Worldwide
$2.39
Go to store
Product prices and availability are accurate as of the date indicated and are subject to change. Any price and availability information displayed on the linked website at the time of purchase will apply to the purchase of this product.  See full search results on eBay

Satellite is ranked as the best album by P.O.D.. 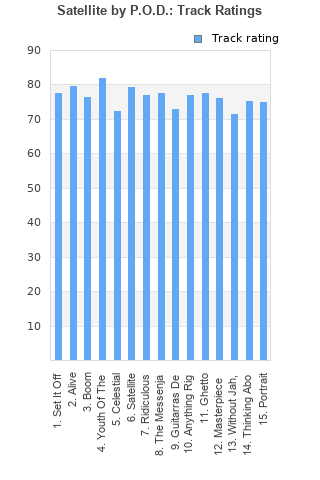 Rating metrics: Outliers can be removed when calculating a mean average to dampen the effects of ratings outside the normal distribution. This figure is provided as the trimmed mean. A high standard deviation can be legitimate, but can sometimes indicate 'gaming' is occurring. Consider a simplified example* of an item receiving ratings of 100, 50, & 0. The mean average rating would be 50. However, ratings of 55, 50 & 45 could also result in the same average. The second average might be more trusted because there is more consensus around a particular rating (a lower deviation).
(*In practice, some albums can have several thousand ratings)
This album has a Bayesian average rating of 66.8/100, a mean average of 65.3/100, and a trimmed mean (excluding outliers) of 65.3/100. The standard deviation for this album is 19.2.

With "Satellite", P.O.D. defined their unique Reggae-rock sound, which they fused with Nu-Metal to create something new. They were among the pioneers of this style of music and helped innovate it along with Korn, Limp Bizkit, and Linkin Park. They weren't the first, but they were one of the most prominent. P.O.D. combined so many genres, yet still managed to create a coherent and recognizable sound, and more impressive still, they made each song unique from the last. Some songs are better than others, but every song deserves a listen.

"Satellite" is another gem in that it keeps filler to a minimal while also putting out fantastic hit songs that I've had on repeat for years.

Released on 9-11-2001. Definitely what America was looking for in a hard rock album. Lyrics about hope and faith in God - still with great head banging crunching guitars, and catchy vocals. With a rap/rock style comparable to Limp Bizkit, it was so much more than another album of that genre. It had rap, hard rock, metal, reggae, and funk all infused into the sound. One of my favorite albums in highschool, and it still stands as one of the best rock albums since the turn of the century.

Truly the best CCM album ever created; definitely blows away Switchfoot's The Beautiful Letdown. Stylistically, there's truly nothing like it. It takes rap, heavy metal, reggae, and worship music, and churns out a true masterpiece.

Your feedback for Satellite