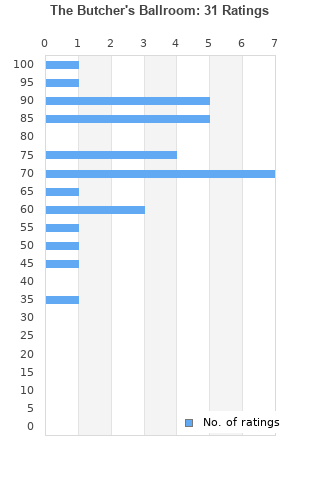 The Butcher's Ballroom is ranked 3rd best out of 3 albums by Diablo Swing Orchestra on BestEverAlbums.com.

The best album by Diablo Swing Orchestra is Sing Along Songs For The Damned & Delirious which is ranked number 8132 in the list of all-time albums with a total rank score of 145. 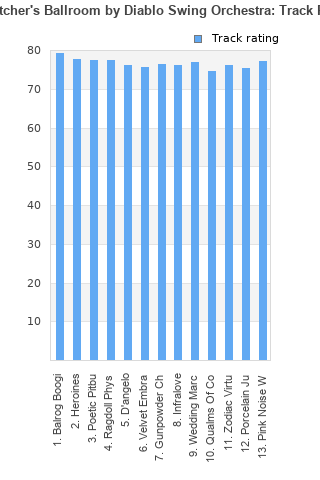 Rating metrics: Outliers can be removed when calculating a mean average to dampen the effects of ratings outside the normal distribution. This figure is provided as the trimmed mean. A high standard deviation can be legitimate, but can sometimes indicate 'gaming' is occurring. Consider a simplified example* of an item receiving ratings of 100, 50, & 0. The mean average rating would be 50. However, ratings of 55, 50 & 45 could also result in the same average. The second average might be more trusted because there is more consensus around a particular rating (a lower deviation).
(*In practice, some albums can have several thousand ratings)
This album has a Bayesian average rating of 73.4/100, a mean average of 73.5/100, and a trimmed mean (excluding outliers) of 73.5/100. The standard deviation for this album is 15.3.

It's definitely interesting... I don't think it holds up as well after multiple listens, but it's still a pretty good album.

Not my cup of tea.

Brilliant album. If it holds up after a couple more listens I may consider making this the first album of this century to enter my top 50. Best tracks are Balrog Boogie and Infralove. Great call Applerill.

I have heard it several times but the last about a month ago. I still remember that I liked a lot how they achieve to mix any kind of music with trash metal riffs. But... I hate the singers voice. It would be an 85/100 for me, but I lower it to 70/100 just because of the effing vocals.

It's a shame that not more people have heard of this amazing album, especially since you can download it for free legally. It's a groundbreaking mix of classical, metal, and jazz.

Your feedback for The Butcher's Ballroom