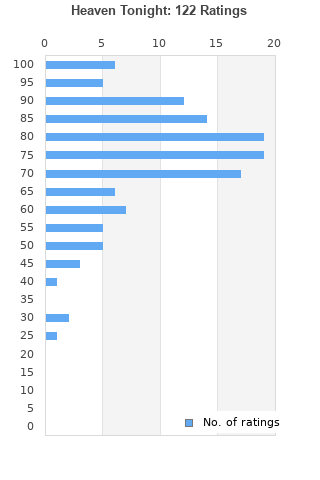 Heaven Tonight is ranked 3rd best out of 27 albums by Cheap Trick on BestEverAlbums.com.

The best album by Cheap Trick is At Budokan which is ranked number 3127 in the list of all-time albums with a total rank score of 478. 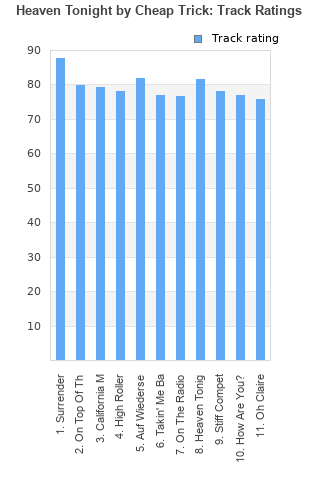 Rating metrics: Outliers can be removed when calculating a mean average to dampen the effects of ratings outside the normal distribution. This figure is provided as the trimmed mean. A high standard deviation can be legitimate, but can sometimes indicate 'gaming' is occurring. Consider a simplified example* of an item receiving ratings of 100, 50, & 0. The mean average rating would be 50. However, ratings of 55, 50 & 45 could also result in the same average. The second average might be more trusted because there is more consensus around a particular rating (a lower deviation).
(*In practice, some albums can have several thousand ratings)
This album is rated in the top 13% of all albums on BestEverAlbums.com. This album has a Bayesian average rating of 75.0/100, a mean average of 74.8/100, and a trimmed mean (excluding outliers) of 75.2/100. The standard deviation for this album is 15.3.

their debut made me believe them as one of the grandfathers of hair metal. Not as raw as their debut and not as glossy as their 2nd, "heaven tonight" sees them take the power pop mantle from big star.

"Heaven Tonight" is Cheap Trick's 3rd album.
"Surrender" kicks off with four minutes of nonstop hooks and ironic lyrics. This is followed by a great arena-ready punch that just keep coming, summing up the strengths of their first two albums.From the onslaught this is a series of superbly crafted and cleverly arranged original songs."Heaven Tonight" has enough gorgeous harmonies, zealous melodies, two-fisted riffs and heavy-metal chords for any rock fan.

Your feedback for Heaven Tonight