Gimme Back My Bullets (studio album) by Lynyrd Skynyrd 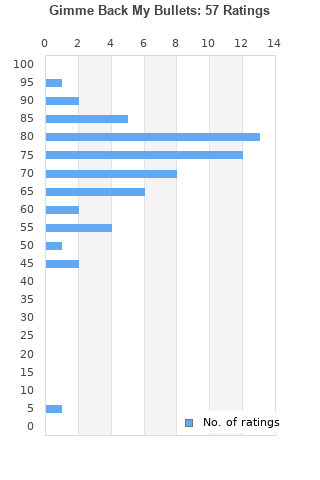 OG classic rock lp LYNYRD SKYNYRD Gimme Back My Bullets MCA 2170 hype sticker V+
Condition: Used
Time left: 12h 8m 2s
Ships to: Worldwide
$45.00
Go to store
Product prices and availability are accurate as of the date indicated and are subject to change. Any price and availability information displayed on the linked website at the time of purchase will apply to the purchase of this product.  See full search results on eBay

Gimme Back My Bullets is ranked 6th best out of 37 albums by Lynyrd Skynyrd on BestEverAlbums.com.

The best album by Lynyrd Skynyrd is (pronounced 'lĕh-'nérd 'skin-'nérd) which is ranked number 421 in the list of all-time albums with a total rank score of 4,727. 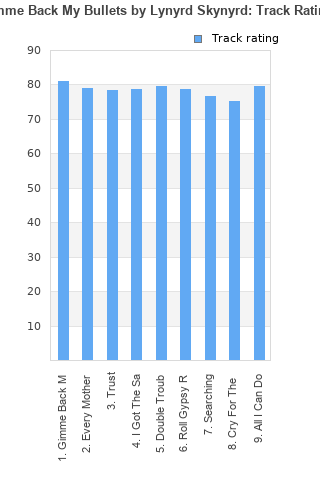 Gimme Back My Bullets rankings

Gimme Back My Bullets collection

Gimme Back My Bullets ratings

Rating metrics: Outliers can be removed when calculating a mean average to dampen the effects of ratings outside the normal distribution. This figure is provided as the trimmed mean. A high standard deviation can be legitimate, but can sometimes indicate 'gaming' is occurring. Consider a simplified example* of an item receiving ratings of 100, 50, & 0. The mean average rating would be 50. However, ratings of 55, 50 & 45 could also result in the same average. The second average might be more trusted because there is more consensus around a particular rating (a lower deviation).
(*In practice, some albums can have several thousand ratings)
This album has a Bayesian average rating of 72.5/100, a mean average of 70.9/100, and a trimmed mean (excluding outliers) of 72.3/100. The standard deviation for this album is 14.5.

Gimme Back My Bullets favourites

Gimme Back My Bullets comments

Underestimated work, But it could be a stoner classic

I enjoyed this release better than I thought I would. Rating (77.78)

This album really makes it look like Skynyrd was running out of steam. The great new ideas are lacking.

Another quality Lynyrd Skynyrd album. Gimme back my bullets, their fourth studio LP, is full of more excellent southern rock. The title track is superb, one of the best songs here, but other highlights include, every mother's son, roll,gypsy,roll, and the beautiful, all I can do is write about it. There is also the band's second J.J Cale cover, this time, I got the same old blues. Another good album from a band who never did anything bad.

Southern rock at it's most fried.

totally agree with the previous 2 comments

Skynyrd went into a bit of a lull in the middle of their 70s streak. This is not a bad album, but not impressive either.

Not a bad album, but when compared to their three masterpieces it falls very very flat. The title track and Double Trouble are highlights.

Your feedback for Gimme Back My Bullets