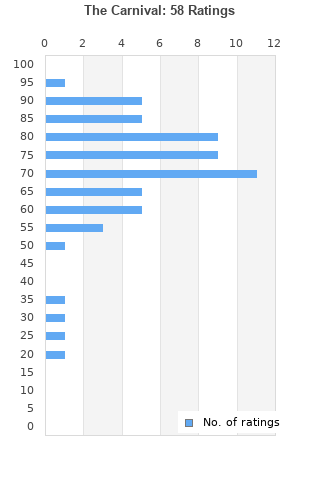 The Carnival is ranked as the best album by Wyclef Jean. 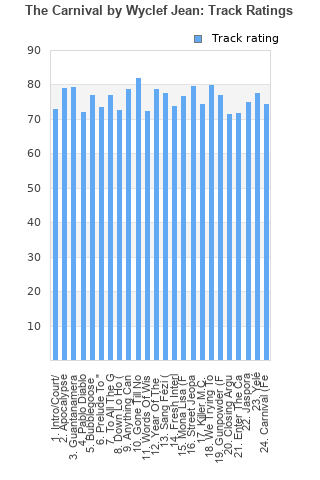 Rating metrics: Outliers can be removed when calculating a mean average to dampen the effects of ratings outside the normal distribution. This figure is provided as the trimmed mean. A high standard deviation can be legitimate, but can sometimes indicate 'gaming' is occurring. Consider a simplified example* of an item receiving ratings of 100, 50, & 0. The mean average rating would be 50. However, ratings of 55, 50 & 45 could also result in the same average. The second average might be more trusted because there is more consensus around a particular rating (a lower deviation).
(*In practice, some albums can have several thousand ratings)
This album has a Bayesian average rating of 73.3/100, a mean average of 71.5/100, and a trimmed mean (excluding outliers) of 73.4/100. The standard deviation for this album is 15.0.

Other than a few tracks here and there on his other albums, this is the only Wyclef Jean solo work that is worth listening to. Please trust me; I went through a Wyclef Jean phase in high school while others were having their pop punk phases, and I listened to most of his discography. It has not aged well AT ALL, with this exception. It's one of the albums that got me into hip-hop, my favorite genre. Admittedly the interludes can be corny, and you can tell Jean is throwing a lot of ideas at the wall to see if something sticks. In contrast to all his other albums, almost everything here does stick! The Kreyol tracks are particular standouts and Gone Till November is a classic.

The justice system mocking in this is great. Commentary on violence powerful. The range of style and musical ideas blow my mind. Have yet to find a better hip-hop/rap album.

I like Gone Till November and Sang Fezi the most here. Great album!

Your feedback for The Carnival