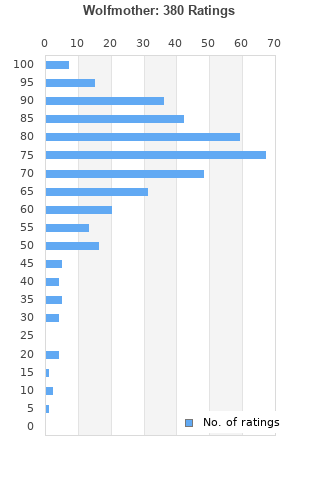 Wolfmother is ranked as the best album by Wolfmother. 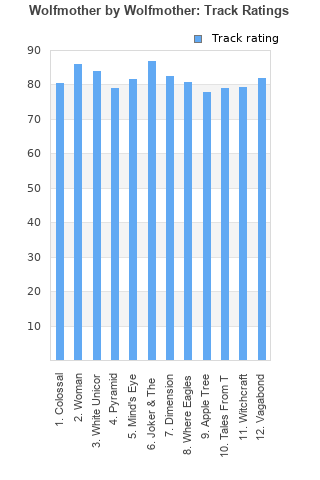 Rating metrics: Outliers can be removed when calculating a mean average to dampen the effects of ratings outside the normal distribution. This figure is provided as the trimmed mean. A high standard deviation can be legitimate, but can sometimes indicate 'gaming' is occurring. Consider a simplified example* of an item receiving ratings of 100, 50, & 0. The mean average rating would be 50. However, ratings of 55, 50 & 45 could also result in the same average. The second average might be more trusted because there is more consensus around a particular rating (a lower deviation).
(*In practice, some albums can have several thousand ratings)
This album has a Bayesian average rating of 73.9/100, a mean average of 72.7/100, and a trimmed mean (excluding outliers) of 74.0/100. The standard deviation for this album is 16.4.

One of the best debut albums for a band after 2000 in my opinion, every track is at least really good and differs from the others. Even a flute solo made the album.

Sadly still their best album, but the bar was set really high.

This wouldn't be my usual style of music, but I love it and it is awesome.

Ranks up there with the greatest debut albums ever. All the best elements of 60's, 70's and 80's rock melded into one. Every track a winner. Outstanding.

Good album, I love how they mix their obvious Black Sabbath/Led Zeppelin influence with The Doors or Jethro Tull-styles. Makes it a real fun album to listen to.

Great debut and throwback to 70s hard rock, wearing their Black Sabbath influences on their sleeves. I don't get where all the hate comes from.

warning: 10th anniversary vinyl has a completely different track order and adds the song LOVE TRAIN... wish I had known this, but in my experience switched up track orders for vinyl don't take anything away from them (for me at least, even on a prog metal album surprisingly)

no they don't suck, you think they sound dated when they came out b/c it's just standard hard rock. and? that's an awesome genre, let me help you with this:

step 1: THROW YOUR S*&^%* EARBUDS AND IPHONE IN THE GARBAGE.

step 2: BUY TOWER SPEAKERS, A MIXER, AND A RECORD PLAYER.

step 3: TURN THE VOLUME UP TO MAX.

enjoy your newfound appreciation for bands like kiss, ac/dc, wolfmother, and every other "standard hard rock" act that you've dismissed after listening with earbuds while lying around or walking/driving somewhere. there's definitely a time and a place for music like this and it's not the same as for more artistic/creative stuff. you're welcome.

Your feedback for Wolfmother