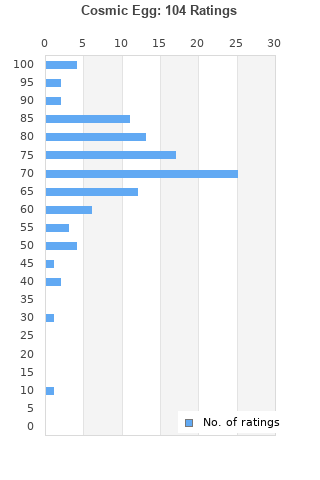 WOLFMOTHER: COSMIC EGG (CD.)
Condition: Brand New
Time left: 17h 10m 36s
Ships to: Worldwide
£18.89
Go to store
Product prices and availability are accurate as of the date indicated and are subject to change. Any price and availability information displayed on the linked website at the time of purchase will apply to the purchase of this product.  See full search results on eBay

Cosmic Egg is ranked 2nd best out of 5 albums by Wolfmother on BestEverAlbums.com.

The best album by Wolfmother is Wolfmother which is ranked number 1312 in the list of all-time albums with a total rank score of 1,376. 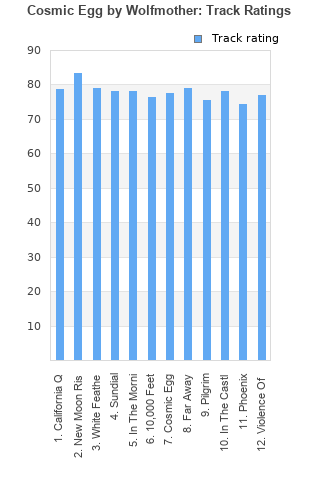 Rating metrics: Outliers can be removed when calculating a mean average to dampen the effects of ratings outside the normal distribution. This figure is provided as the trimmed mean. A high standard deviation can be legitimate, but can sometimes indicate 'gaming' is occurring. Consider a simplified example* of an item receiving ratings of 100, 50, & 0. The mean average rating would be 50. However, ratings of 55, 50 & 45 could also result in the same average. The second average might be more trusted because there is more consensus around a particular rating (a lower deviation).
(*In practice, some albums can have several thousand ratings)
This album has a Bayesian average rating of 72.1/100, a mean average of 71.4/100, and a trimmed mean (excluding outliers) of 72.0/100. The standard deviation for this album is 14.0.

I can't praise this album enough: it's deeply rooted in old Led Zep, Black Sabbath and the likes but it really deserves its place as a work of art on its own. The epic In the Castle is my favorite here but also Phoenix is great as well as all the other tracks on this album. A truly great album.

This is an underrated album. Most people think this is a bad remake of their debute album. That is not the case. It has a fantastic sound with great rock songs. I agree that it needs a few times listening, but is really worth it. I prefer the 16 track version of the album.

Listened to this on a whim today. I was big on it back in 2010 when I was just getting into music and had never listened to a Led Zeppelin or Black Sabbath album. I was curious if it was any good and I had only given up on it because of the band's reputation. Uhhh it's good but not great. I actually don't see a big Led Zeppelin connection, since it's not really a bluesy record, and it's not as heavy as Black Sabbath. There are some weak tracks that feel like imitations of the worst rock of the 70s, including the first two. I really like Sundial though, it's got a nice stoner rock vibe, as does 10,000 Feet. Far Away might be my favorite just because it has sentimental value. I guess it's pretty much what I expected, might come back to those good songs but don't think I'll ever listen to the whole thing again.

While not much changed in their sound in this sophomore effort, it is somewhat better than their also great debut.

Man I don't know what it is, but I freaking love this album art!

While their self titled album has some ok stuff on it, this is pretty bland AND... if I wanted Led Zeppelin or Black Sabbath... I'd listen to them.

there is a deluxe edition too, with other 4 songs of which one is called "caroline" and is a good ballad.

Too bad for the recording quality,otherwise it would be a good 75/100. I really enjoyed Back Round, The Violence Of The Sun and Cosmic Egg.

Creating a second record that is essentially a replication of the first, but that's no problem because i like the first one.

It's different from their debut (mostly because Andrew Stockdale was the only one left, the other two left the band) but it's still solid. I loved it.

Your feedback for Cosmic Egg