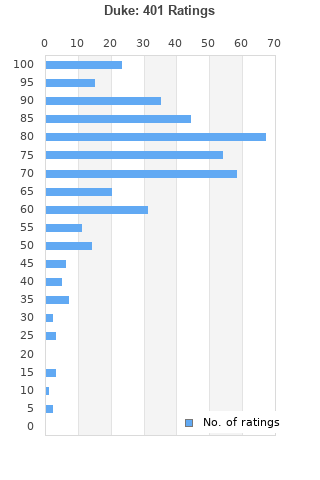 Duke is ranked 6th best out of 33 albums by Genesis on BestEverAlbums.com.

The best album by Genesis is Selling England By The Pound which is ranked number 127 in the list of all-time albums with a total rank score of 12,884. 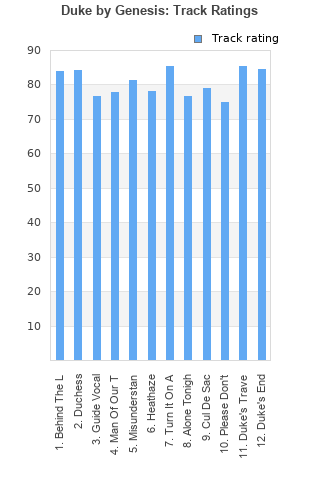 Rating metrics: Outliers can be removed when calculating a mean average to dampen the effects of ratings outside the normal distribution. This figure is provided as the trimmed mean. A high standard deviation can be legitimate, but can sometimes indicate 'gaming' is occurring. Consider a simplified example* of an item receiving ratings of 100, 50, & 0. The mean average rating would be 50. However, ratings of 55, 50 & 45 could also result in the same average. The second average might be more trusted because there is more consensus around a particular rating (a lower deviation).
(*In practice, some albums can have several thousand ratings)
This album is rated in the top 23% of all albums on BestEverAlbums.com. This album has a Bayesian average rating of 74.5/100, a mean average of 73.5/100, and a trimmed mean (excluding outliers) of 74.5/100. The standard deviation for this album is 17.0.

A pretty decent album in an era when I think Genesis were struggling with their identity and were coming to terms with being a three piece. It is an inconsistent batch of songs but there are some absolutely fantastic cuts on this record. The ones I always seem to get drawn to are Behind The Lines, Heathaze, Turn It On Again and Alone Tonight. They all feel extremely cohesive and the instrumental performances on there are phenomenal. I am also a huge fan of Phil Collins vocal performance across the whole album but especially on Alone Tonight as this makes it one of my favourite Genesis songs. The guitar and keyboard work is brilliant as well throughout the whole record with it making the sound feel so full of life and energy which comes straight across to the listener. However, where I think this album struggles is in its style and atmosphere. Just like the group at the time, I think they were a little confused on who they were and so you have a pretty big conflict of style going on all over the record. They are trying to fuse prog and pop but they just didn't seem to be able to do it seamlessly causing it to sound a bit chaotic and very confused at times. Overall, a great album with great songs but it is held back by the fact that it doesn't know what it is and it hasn't aged brilliantly either.

I think this must be the best of the Genesis' 3-piece albums. A good mixture of the prog moments from the past and pop moments yet to come. Well done!

Duchess, Turn It On Again and Duke's Travels are good songs, but the whole album is not very solid.

Loved this at the time.
Hasn't aged well.

This is an excellent album, much stronger than And Then There Were Three. Musically it comes across very powerfully, full on drums, attacking guitars, considered bass and great use of the electric piano.

Probably Genesis' best album of the three-piece era. Collins, Banks and Rutherford all jell really nicely together in this album that blurs the lines between prog and pop for much of its duration. Tracks like Cul-De-Sac and the closing instrumental Duke's Travels provide enough prog to keep old fans satisfied, while songs like Misunderstanding and Alone Tonight showed that the pop direction that Genesis was heading in could be pulled off with success. But the best of the best comes from tracks like Behind the Lines and Turn It On Again that mesh the two genres while also providing some stupidly powerful instrumentation. Throw in the fact that it features half a concept album hidden in there somewhere and you've got the true Genesis stamp of approval. Really nice work from the trio.

Genesis's best of the 80s. While it is a bit of a mixed bag, it still has its moments. The hidden suite (Behind the Lines, Duchess, Guide Vocal, Turn It On Again, Duke's Travels, Duke's End) is prime Genesis and the song Misunderstanding is actually a really great pop song. The rest doesn't do much for me though.

So on this one, Phil Collins left the band and was replaced by another improved Phil Collins with a stronger voice and new song writing skills. Artistically driven by the sad breakdown of his marriage, Collins is in the form of his life and came to the Duke sessions with a bank of songs ideas and full of creative energy.
The subsequent material written collaboratively here is particularly strong (Behind the Lines; Duchess; Turn It On Again; Dukes Travels; Duke's End) and Collins' contributions provide good support (Misunderstanding; Please Don't Ask).
Indeed, if it wasn't for the four weak contributions from Banks and Rutherford (clearly scraping the very bottom of their respective song writing barrels following solo efforts preceding this) - this album could of perhaps been THE definitive Genesis album. It seems difficult to understand why Banks & Rutherford would turn down the chance to use songs like "In the Air Tonight" and others in favour of uninspired offerings such as "Cul-De-Sac" and "Man of our Times"...…. was it ego - or perhaps unwillingness to give up financially valuable songwriting credits in favour of artistic quality?
Better still, they could of spent a few more weeks developing more songs collaboratively instead of including what they must have known was inferior material. Whatever the reason, it was certainly a BIG mistake and a missed opportunity in my opinion.
Nonetheless still a good album (but not quite great).

At Start i think Duke Was an average Record beacuse i was use to Fantastic albums like Foxtrot, Selling england by the pound and Lamb but after a few listens my perspective change, the music is so enjoyable and phil vocals are on point, this should be rank higher

Because we were used to Peter gabriel era (wich i think was the best) doesnt mean this is bad, progressive pop is awesome

More interesting than their previous effort. 7.7/10.

Your feedback for Duke