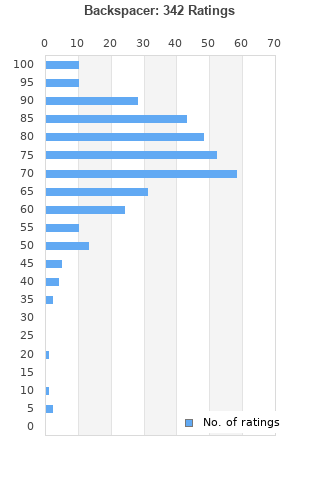 Pearl Jam Lightning Bolt Back Spacer Rearviewmirror CDs
Condition: Very Good
Time left: 2d 13h 46m 52s
Ships to: Worldwide
$19.99
Go to store
Product prices and availability are accurate as of the date indicated and are subject to change. Any price and availability information displayed on the linked website at the time of purchase will apply to the purchase of this product.  See full search results on eBay

Backspacer is ranked 6th best out of 80 albums by Pearl Jam on BestEverAlbums.com.

The best album by Pearl Jam is Ten which is ranked number 50 in the list of all-time albums with a total rank score of 24,770. 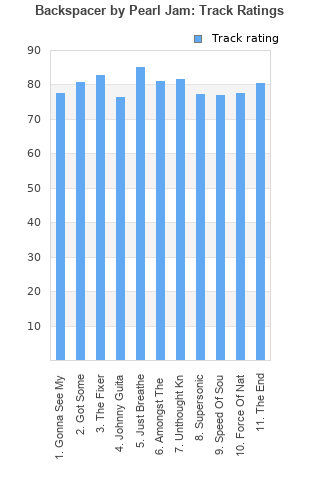 Rating metrics: Outliers can be removed when calculating a mean average to dampen the effects of ratings outside the normal distribution. This figure is provided as the trimmed mean. A high standard deviation can be legitimate, but can sometimes indicate 'gaming' is occurring. Consider a simplified example* of an item receiving ratings of 100, 50, & 0. The mean average rating would be 50. However, ratings of 55, 50 & 45 could also result in the same average. The second average might be more trusted because there is more consensus around a particular rating (a lower deviation).
(*In practice, some albums can have several thousand ratings)
This album has a Bayesian average rating of 74.4/100, a mean average of 73.5/100, and a trimmed mean (excluding outliers) of 74.4/100. The standard deviation for this album is 15.0.

So many very good songs , it's brilliant

A standout album definitely their best in dare I say 15 years at the time but don’t get me wrong plenty of nice tracks during that period. On this album I enjoy Tracks 1-8 and especially 1-3. The pace is a lot faster than a lot of their albums and that works until it slows down at the end.

Love this record. Every song is at least pretty good, with some I'd go as far as to say great. This is a record that you have low expectations going in, but you leave impressed. Definitely the dark horse of their catalog. I would almost take it over Vitalogy as my 3rd favorite Pearl Jam record, after the first and second one obviously. This record is probably more consistent, but Vitalogy's highs are a lot higher though. If you like Pearl Jam, you will love this record

This albums started pretty bland with some generic punkish rock tracks Pearl Jam likes but I was never a fan of. However, the second half is so much better with more melodic and interesting songs and some wonderful ballads. Possibly their best album of the decade.

They never write bad songs, and this album confirms it. Harder pieces alternate to soft ballads (the best pieces are two of them).

While there's some great stuff on here, it really is pretty bland dadrock... and I'm saying this as a fan of dad rock AND Pearl Jam. The last great thing they did, imo, was the live recordings in the year 2000. Their live show is amazing, but their studio work just hasn't really done it for me for a long time. Eddie Vedder's solo work has been more interesting. The guitar work on this album (not all of it) is just a bit too dated.

Pearl Jam has an interesting career arc. They were on top of the world in early and to mid 90's. They disappear into obscurity for about 10 years. Then they return to relevance on their self titled and here on Backspacer when they are in their 40's and thought of as dead in the water.

This is a really good album. I rank it 5th in their catalogue behind their 4 very best albums;

Vitalogy and VS. Then the self titled Avocado. Then Ten. Those four are 95 out of 100's.

Backspacer falls a little short of those but has some great moments.

Got Some, Fixer, and Just Breathe are classics.

Backspacer closes strong with Force of Nature and The End.

Self Titled Avocado and Backspacer is a pretty good run by a band entering their later years.

Amazing! So many great songs, so dense and perfect. It feels both fun, thoughtful and personal. Eddie Vedder sounds better than ever.

Your feedback for Backspacer