Hands All Over (album) by Maroon 5 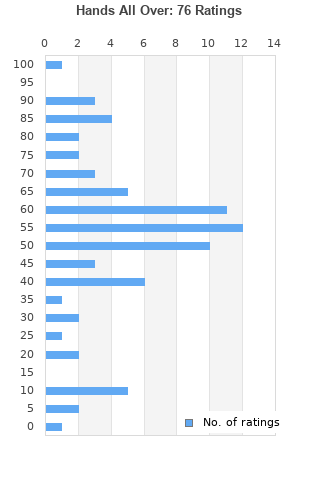 Maroon 5, Hands All Over, Moves Like Jagger, 14 track cd 2011 Excellent Cond.
Condition: Very Good
Time left: 5h 48m 19s
Ships to: Worldwide
£0.75
Go to store
Product prices and availability are accurate as of the date indicated and are subject to change. Any price and availability information displayed on the linked website at the time of purchase will apply to the purchase of this product.  See full search results on eBay

Hands All Over is ranked 5th best out of 8 albums by Maroon 5 on BestEverAlbums.com. 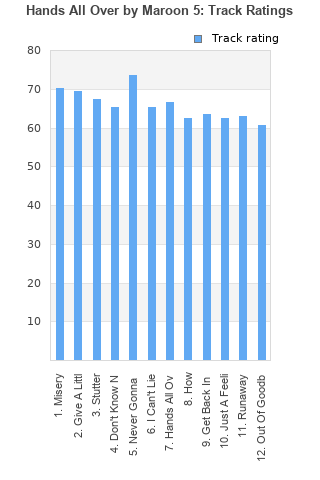 Hands All Over rankings

Hands All Over collection

Hands All Over ratings

Rating metrics: Outliers can be removed when calculating a mean average to dampen the effects of ratings outside the normal distribution. This figure is provided as the trimmed mean. A high standard deviation can be legitimate, but can sometimes indicate 'gaming' is occurring. Consider a simplified example* of an item receiving ratings of 100, 50, & 0. The mean average rating would be 50. However, ratings of 55, 50 & 45 could also result in the same average. The second average might be more trusted because there is more consensus around a particular rating (a lower deviation).
(*In practice, some albums can have several thousand ratings)
This album has a mean average rating of 52.0/100. The trimmed mean (excluding outliers) is 51.7/100. The standard deviation for this album is 20.7.

Hands All Over favourites

Hands All Over comments

Not even a good song here

Some solid tracks sprinkled throughout, but as the album goes on the sound grows tired and the songs get more generic. It's got some soul from the first album and some of the overproduction from the second album. Less consistent, but higher highs that "It Won't Be Soon Before Long."

Hands All Over is when Maroon 5 completely commits to having zero identity and becomes a hit making machine with varying results.

This album doesn't blatantly try to be what popular music is (Overexposed) or so slickly produced like V.

It trends downward after their 2nd album and they get worse as they go.

It's Adam Levine and the Robots playing to his strengths.

Like all of their albums - they have 1-3 songs that makes the whole album. It's of course not enough to make those albums good albums.

Nothing like as good as "songs about Jane", and even that was pretty mediocre.

Your feedback for Hands All Over