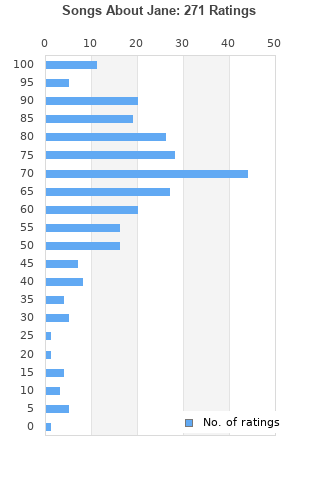 (VG) Songs About Jane by Maroon 5 (CD, Jun-2002, BMG Octone Records)
Condition: Very Good
Time left: 1h 45m 32s
Ships to: Worldwide
$8.00
Go to store
Product prices and availability are accurate as of the date indicated and are subject to change. Any price and availability information displayed on the linked website at the time of purchase will apply to the purchase of this product.  See full search results on eBay

Songs About Jane is ranked as the best album by Maroon 5. 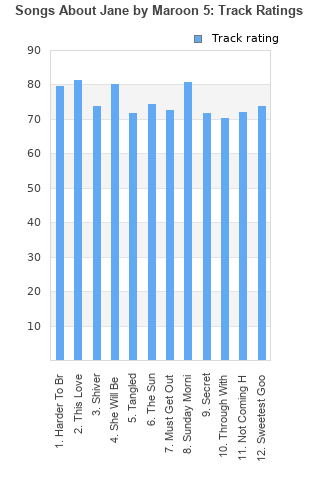 Rating metrics: Outliers can be removed when calculating a mean average to dampen the effects of ratings outside the normal distribution. This figure is provided as the trimmed mean. A high standard deviation can be legitimate, but can sometimes indicate 'gaming' is occurring. Consider a simplified example* of an item receiving ratings of 100, 50, & 0. The mean average rating would be 50. However, ratings of 55, 50 & 45 could also result in the same average. The second average might be more trusted because there is more consensus around a particular rating (a lower deviation).
(*In practice, some albums can have several thousand ratings)
This album has a Bayesian average rating of 68.1/100, a mean average of 66.8/100, and a trimmed mean (excluding outliers) of 67.8/100. The standard deviation for this album is 20.0.

It is mostly based on 3-4 very good pop songs, but it still has to be their best album, if you compare it with what came after. Overall, 55/100.

I don't care much for Maroon 5, but that trio of Harder to Breathe, This Love and She Will Be Loved is pretty excellent.

Fantastic pop album. This came at the very tail end of pop still being a mostly analogue format; comfortably throwback, with funk influences. really sticky hooks and riffs, some surprisingly tender lyrics and songwriting. This thing was absolutely the sh*t and it still holds up all these years later. This album launched the career of Adam Levine (oh how far the apple has fallen...) and the rest of the band, which have declined into utter pop culture cliches since then. But this record will forever remain something special.

This is actually very decent. Much better than the crap they've been putting out in the last 10 years. Here they atleast have some energy and a couple of really strong singles.

I saw these guys before they were big opening for Matchbox Twenty. Obviously Levine is a talent and it's refreshing to hear their sound before they became radio friendly hit makers.

But like all Maroon 5 albums, every song is an attempt at a radio single and some work and some don't.

Harder to Breathe is excellent and so is She Will Be Loved.

Sunday Morning is good too. The rest is blah.

Definetively underrated...is a great album so far from their current mainstream and pop sound. Very pleasant to listen.

Best from them, probably forever unless they can get back to this feeling and sound.

Really different than current Maroon 5. Way more laid back. Lot more soul and rock than expected. The guitars are more complex and Adam actually displays some good vocals. Even the lyrics are better; more subdued and explore much more believable dysfunctional relationships.

Your feedback for Songs About Jane