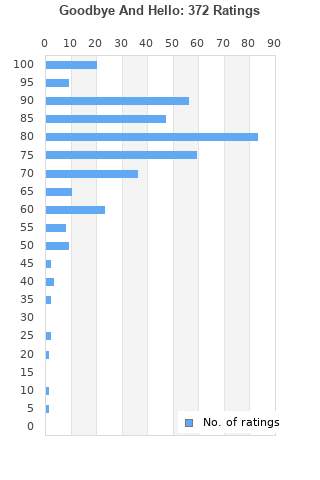 Goodbye And Hello is ranked as the best album by Tim Buckley. 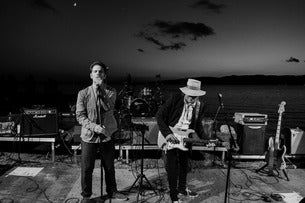 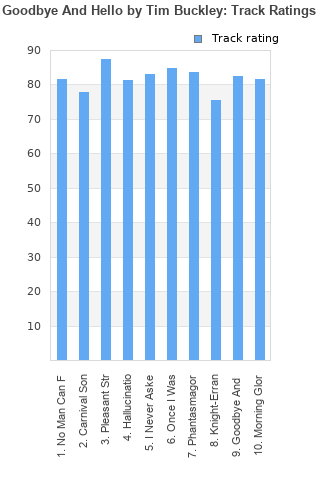 Rating metrics: Outliers can be removed when calculating a mean average to dampen the effects of ratings outside the normal distribution. This figure is provided as the trimmed mean. A high standard deviation can be legitimate, but can sometimes indicate 'gaming' is occurring. Consider a simplified example* of an item receiving ratings of 100, 50, & 0. The mean average rating would be 50. However, ratings of 55, 50 & 45 could also result in the same average. The second average might be more trusted because there is more consensus around a particular rating (a lower deviation).
(*In practice, some albums can have several thousand ratings)
This album is rated in the top 3% of all albums on BestEverAlbums.com. This album has a Bayesian average rating of 78.0/100, a mean average of 77.3/100, and a trimmed mean (excluding outliers) of 78.2/100. The standard deviation for this album is 14.3.

Honestly, I'm not the biggest fan of his voice, but there is like a 3 nice songs.

Wonderful, his early stuff is by far the best of his career. Probably as good as anything in my view.

Much better than Starsailor

As an album written and performed by a 19-year-old, this is a pretty impressive early statement. With that being said, I find the album to be very uneven and at times the late 60s influences like the "raga" eastern motifs, the randomly inserted sound effects, and the straight ahead sincerity. At one point, I started wondering if Tim Buckley was a distant lyrical cousin of Davy Jones of The Monkees because they legitimately are indistinguishable on a couple of tracks. Best track is "Pleasant Street" by a country mile and the worst track is the title one, also by a country mile. Buckley's later stuff gets more experimental and convention breaking and represents a strong place to start.

A much more tame Tim Buckley than what would come. There is good songwriting and good vocals but it fails to reach the creative peaks of Lorca or Starsailor. You can tell Tim isn't as comfortable with his voice as he would become. However, I thought his 12-string sounded especially nice on some of the songs. My favorite song is "Phantasmagoria in Two".

This is by the favourite of the four Tim Buckley albums I own. The instrumentation, effects and production delivers an experience which sounds a lot later than 1967. I absolutely love 'Carnival Song' and 'Pleasant Street', in fact the latter is one of my all time favourite tracks from the sixties, fantastic! The track which made this album famous is the psychedelic 'Hallucinations', a simple acoustic guitar underpins the 'swinging' lyric, with various sound effects painting the hallucinogenic scene in the background. On 'I Never Asked to be Your Mountain' Buckley showcases his amazing vocal abilities which are accompanied by congas, guitars and what sounds like an early electric piano. Moving on to 'Once I Was', this sounds very 'Neil Young' with the acoustic guitar and harmonica leading the way. How much I love this very diverse album, I have to get it on vinyl.

I had a busy day of listening today. I had a half dozen albums to relisten to. This one included. And to be honest I just wasn't overwhelmingly excited about listening to Tim Buckley. He had never yet clicked with me. Meaning he had never really connected with me or illuminated for me some sort of realization of the greatness of his music or the coolness or the style or virtuosity, etc. It just had never straightened into a clear concept in my mind which I liked. I had listened to this album and a few of his later (stranger and more experimental) albums.

But I just made myself push play to at least recollect what i thought of this album. And the coolest thing happened. I finally "Got It". I mean I finally heard the sheer creative audacity of what Buckley had done with this album. I found myself overcome by the emotions he was expressing, I heard and understood what he was doing with his somewhat over the top musical waves. The palate with which he paints this album is immense. There are strange effects on many things, and guitars, and keyboards and symphonies and big crescendos and there is, of course, his vocals. His vocals were what finally worked for me. They just are all over the place and all in service of the songs. His voice has always been mentioned as a game changer in many ways, but I never liked them much. But here they really work, he sounds like he is almost bursting with an unimaginable amount of emotion and fire and sadness. And as he sings he is releasing these sounds and these feelings and its oft-times glorious.

And yes later albums are definitely pushed way way up my "To Listen" list. I believe its generally understood that he got more and more out there and experimental as he went along in his short life. And I do recall "Lorca" and "Starsailor" being quite strange and beautiful. I am very very excited to listen to them for later songwriter lists (1969-1971 will probably HAVE to be top 15s at this rate cuz man there is a lot of great stuff coming up to listen to for those years). Its amazing to think he became somehow MORE innovative. Cuz listening to this today just blew my mind in how incredibly unique and forward-thinking the whole sound and flow of the album was. I mean you can hear traces of it in Fred Neil, but this is just next level wild and ahead of its time. Its a goodie.

Great album, I enjoy this a lot more than his more experimental stuff (Lorca, etc). I Once Was is awesome and gorgeous, and the title track is an epic

Huge improvement on the debut. Excellent songs/lyrics from a brilliant contemporary of Dylan and Cohen. Possibly Buckley's best.

Your feedback for Goodbye And Hello