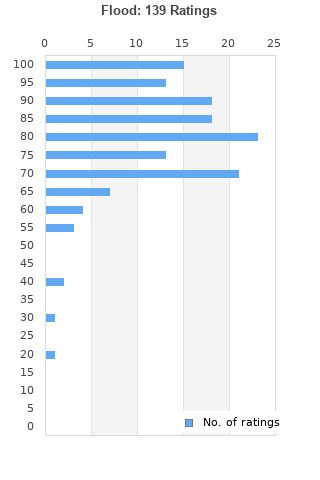 Flood is ranked as the best album by ボリス [Boris]. 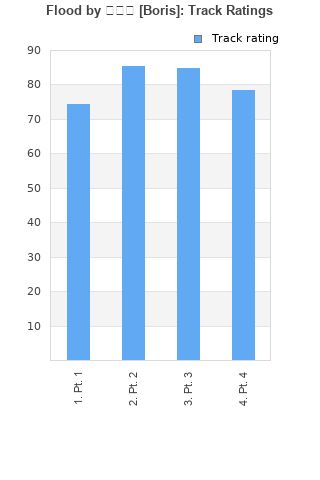 Rating metrics: Outliers can be removed when calculating a mean average to dampen the effects of ratings outside the normal distribution. This figure is provided as the trimmed mean. A high standard deviation can be legitimate, but can sometimes indicate 'gaming' is occurring. Consider a simplified example* of an item receiving ratings of 100, 50, & 0. The mean average rating would be 50. However, ratings of 55, 50 & 45 could also result in the same average. The second average might be more trusted because there is more consensus around a particular rating (a lower deviation).
(*In practice, some albums can have several thousand ratings)
This album is rated in the top 1% of all albums on BestEverAlbums.com. This album has a Bayesian average rating of 80.7/100, a mean average of 80.4/100, and a trimmed mean (excluding outliers) of 81.3/100. The standard deviation for this album is 14.3.

I was expecting a heavier sound than this but in actual fact it is quite peaceful and relaxing in places. This is all down to the composition and the instrumentation. The album is beautifully crafted and feels like one complete cohesive package that effortlessly flows while it takes you on a brilliant journey. The instrumentation then adds depth to the sound to back this up so that in the quieter and more serene moments we are still entertained. The guitar is brilliant on this record and the added effects we get make the music feel otherworldly. Also, I am a huge fan of the production which brings the soundscape to life and makes the music sound so fresh and new even 20 years later. However, the record is just too long in my opinion and it is overly drawn out. Each song could be cut down by 5 minutes or maybe more as there isn't a lot going on at times. Furthermore, I think the music can sound a little bare and it could do with either more instruments or more exciting instrumentation just to make it a little more vibrant to keep us entertained for the elongated 70 minutes. Overall, there is genius music on this release but it gets lost and confused on the way making for a not that enjoyable experience for us.

Acquired taste, I just couldn’t get into this album

The buildup is honestly the best part of this album; the eventual rollicking doom epic isn't intense enough to get proper catharsis from and to describe the last 20 minutes or so as "taxing" would be a tremendous understatement-an entire third of the album, reserved for Krautrock-style noodling! Interesting and ambitious, but not one of Boris' finer albums.

Your feedback for Flood