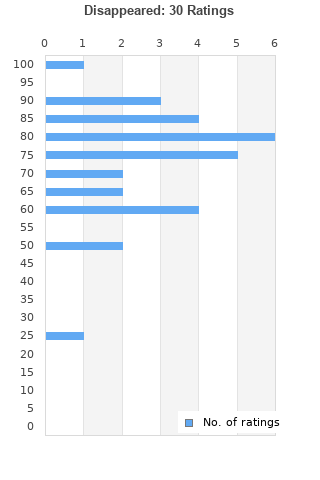 Disappeared is ranked as the best album by Spring Heel Jack. 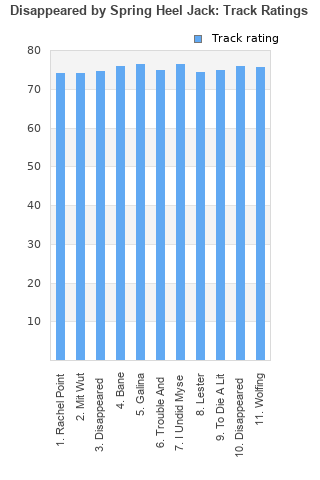 Rating metrics: Outliers can be removed when calculating a mean average to dampen the effects of ratings outside the normal distribution. This figure is provided as the trimmed mean. A high standard deviation can be legitimate, but can sometimes indicate 'gaming' is occurring. Consider a simplified example* of an item receiving ratings of 100, 50, & 0. The mean average rating would be 50. However, ratings of 55, 50 & 45 could also result in the same average. The second average might be more trusted because there is more consensus around a particular rating (a lower deviation).
(*In practice, some albums can have several thousand ratings)
This album is rated in the top 9% of all albums on BestEverAlbums.com. This album has a Bayesian average rating of 75.5/100, a mean average of 74.6/100, and a trimmed mean (excluding outliers) of 76.5/100. The standard deviation for this album is 14.5.

I'm not quite as big a fan of it on my first listen as Furry Stalin down below me (its a top ten album of his despite the 75/100 rating, his chart is what actually turned me on to this album). It is a pretty cool album though. Not quite as weird avant-garde jazz as their later releases, but you can see it in there on some tracks. I think this is an album I'll be coming back to

The Spring Heel Jack project was launched in 1994 by the duo of John Coxon, ex guitarist for Spiritualized and Ashley Wales, ex collaborator of Shock Headed Peters. The first track on this amazing album, 'Rachel Point', opens with pounding drums, Miles Davis-style trumpet licks and looping keyboard wails. The mind-blowing 'Galina', is characterized by tribal pow-pow beats, heavy basslines, organ drones and minimilist piano patterns set against a symphonic backdrop. The sound is sonically extreme and thrilling. But this isn't the entire story. The duo also emphasize the romantic in the epic trumpet crescendo of 'Trouble And Luck' and the Bacharach-tinged orchestral aria of the reggaefied 'To Die A Little'. Coxon and Wales rank amongst the greatest musicians and composers of their generation.

Your feedback for Disappeared