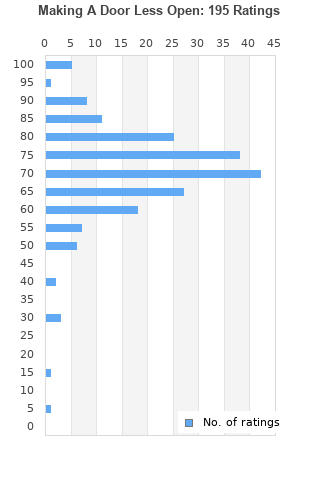 Making A Door Less Open is ranked 8th best out of 16 albums by Car Seat Headrest on BestEverAlbums.com.

The best album by Car Seat Headrest is Teens Of Denial which is ranked number 214 in the list of all-time albums with a total rank score of 8,969.

Listen to Making A Door Less Open on YouTube 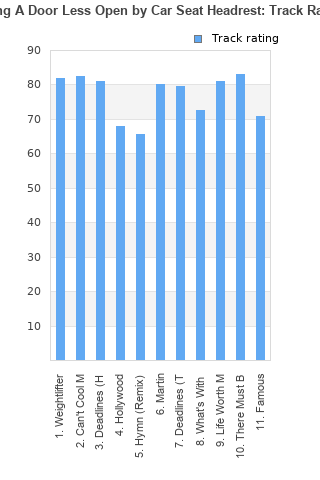 Rating metrics: Outliers can be removed when calculating a mean average to dampen the effects of ratings outside the normal distribution. This figure is provided as the trimmed mean. A high standard deviation can be legitimate, but can sometimes indicate 'gaming' is occurring. Consider a simplified example* of an item receiving ratings of 100, 50, & 0. The mean average rating would be 50. However, ratings of 55, 50 & 45 could also result in the same average. The second average might be more trusted because there is more consensus around a particular rating (a lower deviation).
(*In practice, some albums can have several thousand ratings)
This album has a mean average rating of 73.0/100. The trimmed mean (excluding outliers) is 73.7/100. The standard deviation for this album is 11.1.

Pretty good effort from Car Seat Headrest. Will goes back to a more electronic sound that he has used on previous releases but this time he trades the low-fi sound for more pop-influenced production. There is some lack of focus on the whole but most of the individual songs are quality, "Hollywood" not being one of them. While this isn't my favorite album of theirs, I still enjoy it. The Deadlines are my favorite parts of the record and I was very surprised to learn that they aren't even included on the vinyl version.

I can fully understand why people may not like this record, especially if you are only familiar with Teens and Twin Fantasy. But dig deeper and go further back and you will discover that this is the kind of sound that Will has been adding to his much earlier records in small doses, but now with a label behind him he is able to push the sound forward and make it his own. I didn't really vibe with the singles released leading up the album, but after the full release it all started to come together (For the most part). 'Weightlifters' is a great opener, 'Can't Cool Me Down' is a grower, despite falling short in my opinion. And the two 'Deadline' tracks are a lot of fun, with 'Thoughtful' being my favourite of the two, as Will really gets experimental with sounds. Unfortunately tracks like 'Hollywood' and 'Hymn (Remix) will never land for me. Despite the awesome guitar work in 'Hollywood', it's far too goofy vocally for my taste, With what sounds like Andrew is shouting with his mouth stuffed with Marshmallows or something (idk). The album leads up to 'There Must Be More Blood' and 'Life Worth Missing' which sounds closest to anything off the 'Teens of Denial' record and are great tunes. Unfortunately the closing track 'Famous' really leaves a lot to desire and doesn't satisfy me at all.

Favourite Tracks:
Weightlifters
Can't Cool Me Down
Martin
Deadlines (Thoughtful)
Life Worth Missing
There Must Be More Blood

Car Seat Headrest's new album unfortunately comes across as a stylistic hot mess that's a bit incomprehensible. Feels like a pretentious attempt to break some genre barrier, but it's just chaos a lot of the time with unfulfilled ideas. There Must Be More Than Blood is the only track to land for me. Easily my least favorite of their albums.

I think the biggest problem with it is it’s inconsistent sound. This different approach to by Will and the gang isn’t that experimental, if anything, it just sounds more like a commercial approach. Not interested in most of the songs here. Hollywood also isn’t that bad. Its a ridiculous song, but I’ve heard worse. There Must Be More Than Blood is most definitely a stand out, but regardless this is a major step down.

The band’s weakest effort to date. Sonically it treads new ground, but thematically it tackles ideas dealt with much better on How to Leave Town. While Can’t Cool Me Down has grown on me, Martin seems to identify how the album goes, with it closing just as it begins to really get a head of steam, and the less said about Hollywood - the better. While it’s hard to top the songwriting on Teens of Denial, it’s a massive shame he couldn’t as Will has proven time and time again he is a MASTER songwriter, and seeing the watered down bones of the songs here is a shame.

On the first listen it's my least favourite of the 3 records I've heard from them. Hollywood was a weird choice as a single because it's not one of the best songs here, and it's not the best representation of the album's sound. But whatever, it's still a decent song. The problem is, "decent" is also how you could describe a big portion of Making a Door Less Open, there's not enough "brilliant". And it's not necessarily connected with the big change in sound they went through, it seems like a songwriting issue to me. While yes, I do miss their sloppy, fun and catchy guitar hooks, I think this indietronic style has some other qualities. It's very hypnotic, repetitive (in a good way) and much more diverse than their usual indie rock style. However there's not enough highlights to really rival their best work. Well-rounded album with some great cuts, and I'm glad they tried this, but that additional spark of brilliance is not as bright as on Teens of Denial or Twin Fantasy. There's no Drunk Drivers/Killer Whales, there's no Beach Life In Death. Definitely worth of your time, and I'll give it another go soon, maybe my opinion changes.

I listened it from start to finish without skipping a song and i really enjoyed overall, which is surprising because i didn't use to like that much electronic in rock music, but some bands, especially Radiohead, changed my view for good. In this album, Car Seat Headrest follow the same route as them and experiment really hard after their much acclaimed album, and i think this brave move worked rather well in here too. To me, this is "Kid A" of Car Seat Headrest, but of course, in more modern ways.

Your feedback for Making A Door Less Open