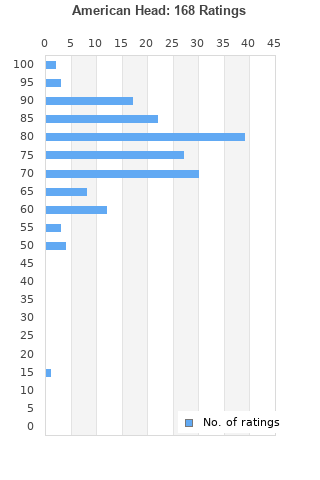 American Head is ranked 8th best out of 47 albums by The Flaming Lips on BestEverAlbums.com.

The best album by The Flaming Lips is The Soft Bulletin which is ranked number 107 in the list of all-time albums with a total rank score of 14,753. 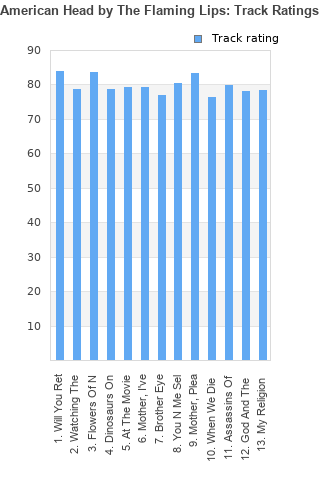 Rating metrics: Outliers can be removed when calculating a mean average to dampen the effects of ratings outside the normal distribution. This figure is provided as the trimmed mean. A high standard deviation can be legitimate, but can sometimes indicate 'gaming' is occurring. Consider a simplified example* of an item receiving ratings of 100, 50, & 0. The mean average rating would be 50. However, ratings of 55, 50 & 45 could also result in the same average. The second average might be more trusted because there is more consensus around a particular rating (a lower deviation).
(*In practice, some albums can have several thousand ratings)
This album is rated in the top 7% of all albums on BestEverAlbums.com. This album has a Bayesian average rating of 76.4/100, a mean average of 75.7/100, and a trimmed mean (excluding outliers) of 76.6/100. The standard deviation for this album is 12.9.

Are we positive this album doesn't suck? I thought The Terror, hot on the heels of Embryonic marked an amazing exploration into new territory. Damn, that's my favorite album of al time. This? Seems like a bunch of leftover clips gathered off the studio floor.

I have a bias, I must admit, I grew up with the flaming lips always somewhere in the background. They're one of the most life-affirming bands out there, and yet they don't shy away from dark material. They embrace the chaos of the unknown with a colorful psychedelia perfectly fronted by Wayne Coyne's cartoonish charisma. I've always felt the band was great at producing imagery through their sound, which is highly effective especially when they've got a coherent theme or story laced through their album. This was most successful on Soft Bulletin and Yoshimi. After this period, their work did appear to coalesce upon themes that provided more coherency. Still, not much in ways of story until their previous effort King's Mouth, which didn't have any staying power for me personally. This more than made up for that.
American Head is one of my favorite records of 2020. The Flaming Lips have captured the spirit of their earlier work and adapted it to modern tastes, still very much and uniquely The Flaming Lips. That spirit has matured here and returns to deliver the most personal set of songs I've heard from The Lips. It's clear Wayne isn't discussing scientists, or robot fighting karate enthusiasts. He's talking about his coming of age in middle America, surrounded by drug culture.
It'd be a crime not to mention Kacey Musgraves, who isn't only featured on one track but makes guest vocal performances throughout the album as a backup singer. She lifts the songs to completely new standards where her voice touches them. It adds a new dimension to the band, more color to the sound, and it's a lovely addition.

Favorite tracks: Flowers of Neptune 6, Brother Eye, You N Me Sellin' Weed, God And The Policeman

Starts off strong but tapers off midway through I think. There isn't any filler it's mostly good throughout. Kacey Musgraves is a fantastic addition. The ethereal landscapes that her harmonies make work perfectly with the style the Lips employ when using her.

so after a few months listening to this album, i have upped my ratings,i keep comin back to this album.i really do think this is as good as soft bulletin

Great moments in this album. High-quality music, one of their best albums.

Heavenly "spacy" melodies and lyrics, as strange as the Lips are known. It's psychedelic rock in a contemporary outfit. Lovin' it.

A full return to form

Like a lot of great recent albums from Radiohead (A Moon Shaped Pool) and Bon Iver (i,i), American Head combines a number of elements from some of the bands best works. Yoshimi and At War With the Mystics are probably the most identifiable, with a side of Soft Bulletin. This is the album I was hoping for after King’s Mouth trended back in this direction. Definitely a Top 5 Lips album, may end up higher after a few more listens.

Your feedback for American Head