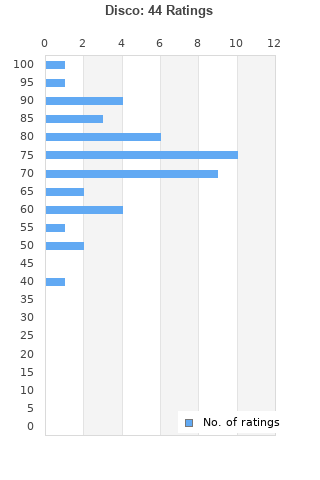 Bridget Jones: The Edge of Reason [Audio CD] Will Young; Jamelia; Kylie Minogu..
Condition: Very Good
Time left: 1h 27m 52s
Ships to: Worldwide
$5.95
Go to store
Product prices and availability are accurate as of the date indicated and are subject to change. Any price and availability information displayed on the linked website at the time of purchase will apply to the purchase of this product.  See full search results on eBay

Disco is ranked 8th best out of 20 albums by Kylie Minogue on BestEverAlbums.com.

The best album by Kylie Minogue is Fever which is ranked number 2724 in the list of all-time albums with a total rank score of 569. 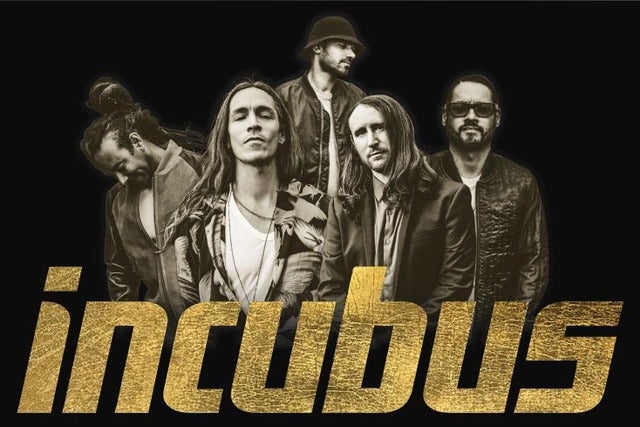 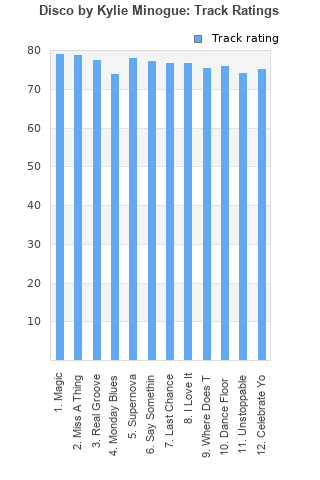 Rating metrics: Outliers can be removed when calculating a mean average to dampen the effects of ratings outside the normal distribution. This figure is provided as the trimmed mean. A high standard deviation can be legitimate, but can sometimes indicate 'gaming' is occurring. Consider a simplified example* of an item receiving ratings of 100, 50, & 0. The mean average rating would be 50. However, ratings of 55, 50 & 45 could also result in the same average. The second average might be more trusted because there is more consensus around a particular rating (a lower deviation).
(*In practice, some albums can have several thousand ratings)
This album has a Bayesian average rating of 72.6/100, a mean average of 72.4/100, and a trimmed mean (excluding outliers) of 72.4/100. The standard deviation for this album is 12.9.

Feel-good album. The lyrics are weak but the music is very good in its kind.
Favourite tracks: Supernova, Miss a Thing, Real Groove, Magic.

"Disco" is ironically the weakest of the disco revival albums of 2020. Kylie Minogue's vocals sound weak and a bit too high at times. A lot of the choruses are clunky and repetitive. There are many lyrical misstep's such as "From another galaxy like Jupiter and Mars" on "Supernova". The instrumentals are the complete opposite. Nearly every track is fun and catchy. There is not much variation in style but I still like them.

In the middle of a pandemic Kylie comes with an disco album called "Disco" acting like nothing's going on. I love it.

Your feedback for Disco