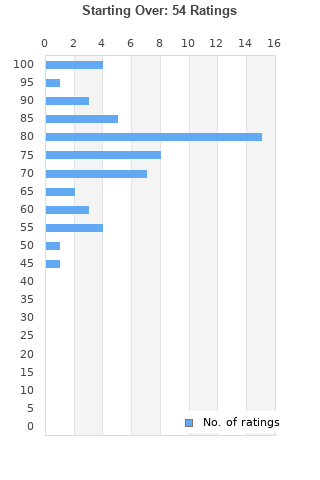 STARTING OVER (2LP/180G)
Condition: New
Time left: 21h 46m 8s
Ships to: Worldwide
$30.37
Go to store
Product prices and availability are accurate as of the date indicated and are subject to change. Any price and availability information displayed on the linked website at the time of purchase will apply to the purchase of this product.  See full search results on eBay

Starting Over is ranked 2nd best out of 4 albums by Chris Stapleton on BestEverAlbums.com.

The best album by Chris Stapleton is Traveller which is ranked number 2625 in the list of all-time albums with a total rank score of 594. 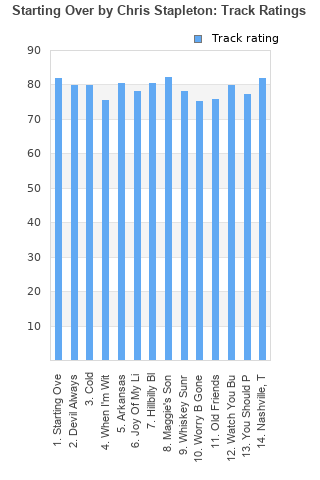 Rating metrics: Outliers can be removed when calculating a mean average to dampen the effects of ratings outside the normal distribution. This figure is provided as the trimmed mean. A high standard deviation can be legitimate, but can sometimes indicate 'gaming' is occurring. Consider a simplified example* of an item receiving ratings of 100, 50, & 0. The mean average rating would be 50. However, ratings of 55, 50 & 45 could also result in the same average. The second average might be more trusted because there is more consensus around a particular rating (a lower deviation).
(*In practice, some albums can have several thousand ratings)
This album is rated in the top 6% of all albums on BestEverAlbums.com. This album has a Bayesian average rating of 76.5/100, a mean average of 77.2/100, and a trimmed mean (excluding outliers) of 77.2/100. The standard deviation for this album is 12.4.

Decent songwriter mix of country and blues rock. The vocals are good but lack variety. Instrumentation is better but underwhelming at times lessening the effect of the songs. Not too many risks taken.

"Starting Over" is a collection of above average country tunes. I particularly enjoy the heavier guitar aggressive tracks. "Devil Always Made Me Think Twice" is a highlight with its reflective message and bluesy guitars. The other Satan referencing song, "Watch You Burn", contains the most striking lyricisms of the album. "Starting Over" weakness comes its lesser cuts. Some of the softer songs blend together and removing would probably help the records flow.

Your feedback for Starting Over