The Third Reich 'N Roll (studio album) by The Residents 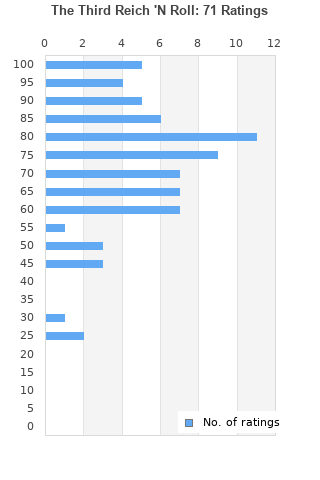 The Third Reich 'N Roll is ranked 4th best out of 129 albums by The Residents on BestEverAlbums.com.

The best album by The Residents is Not Available which is ranked number 1158 in the list of all-time albums with a total rank score of 1,570.

Tickets from Ticketmaster Get tickets
May
06
Thu
19:30

Listen to The Third Reich 'N Roll on YouTube 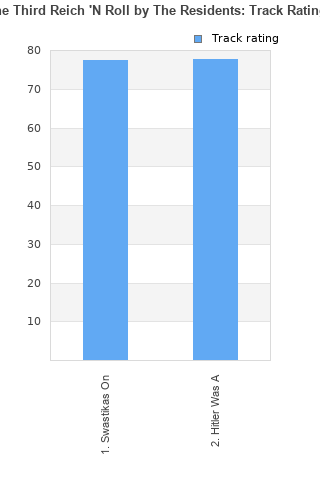 Rating metrics: Outliers can be removed when calculating a mean average to dampen the effects of ratings outside the normal distribution. This figure is provided as the trimmed mean. A high standard deviation can be legitimate, but can sometimes indicate 'gaming' is occurring. Consider a simplified example* of an item receiving ratings of 100, 50, & 0. The mean average rating would be 50. However, ratings of 55, 50 & 45 could also result in the same average. The second average might be more trusted because there is more consensus around a particular rating (a lower deviation).
(*In practice, some albums can have several thousand ratings)
This album is rated in the top 10% of all albums on BestEverAlbums.com. This album has a Bayesian average rating of 75.7/100, a mean average of 75.2/100, and a trimmed mean (excluding outliers) of 76.1/100. The standard deviation for this album is 15.8.

Residents are famous because they are anonymous. As for all avant-garde music, either we love the album or we find it inaudible. The music of the Residents is certainly the strangest I have ever heard. Residents in this album ransack standards to unveil a piece of darkness unpublished. This infra-thin detail is especially present in popular music. It's the one used for propaganda. For their demonstration of great gravity, Residents use American rock'n'roll tubes. These are denatured and yet recognizable. What the destructive parody of Residents reveals (for our biggest melancholy melancholy or not) is the absence of intrinsic nature to the standards used. These can be interpreted according to an unlimited axis ... including Nazi. The hippie hymn "Light My Fire" adopts a fascist stiffness that is really frightening. Third Reich 'n' Roll crashes an abscess. And I can only admire the Residents' insight and their harsh criticism of popular music. And this lucidity is probably preserved because they do not belong to the world of rock. Residents, by their anonymity, can address the most delicate criticisms to hold without retaking or falling into demagogy.

Best track: There are only 2 tracks... lol

A challenging but ultimately satisfying album. Not for the pretty music crowd.

Perhaps The Residents most immediately recognizable album is an LP that serves as something of an alternate universe listening to pop radio, where the band members re-arrange and re-vocalize certain parts of dozens of popular hits. The Third Reich 'n Roll is usually viewed as a deconstruction of the mid-20th century pop idiom by a crowd of art rockers who were at best irreverent and at worst incredibly nasty to the music they chose to lampoon. Though the arrangements are of course humorous and stray widely from the snippets of hot radio hits that you could hear on, say, that Phil Spector compilation I can't be assed to identify at present, I think that such a reading really misses a lot of what's going on here. The Residents don't seek to make ugly the beautiful, but to rather provide, like the best jazz music before it, a re-articulation of the idiom for different sensibilities, a recontextualization based not on resentment but of love. The Residents, for all their otherness, were always tied deeply to the core tenets of pop and rock music of their time while constantly looking to expand it out at a million miles an hour in every direction. This is the best example of that and my favorite album of theirs.

One of the strangest records I've heard in my lifetime. The Residents' second album acts as a collage of popular songs from the 60s, noise, commercials, and god knows what else in the form of one strange avant-garde piece of satire. This is not easy listening.

Your feedback for The Third Reich 'N Roll