Bad As Me (studio album) by Tom Waits 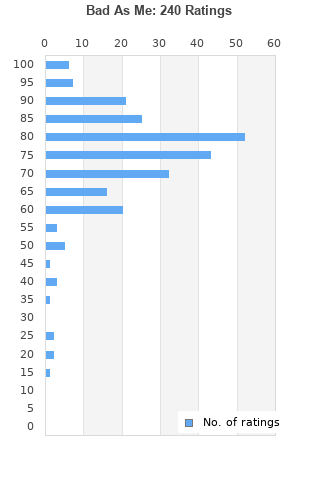 Tom Waits - Bad As Me [CD]
Condition: Brand New
Time left: 17h 30m 21s
Ships to: Worldwide
£12.31
Go to store
Product prices and availability are accurate as of the date indicated and are subject to change. Any price and availability information displayed on the linked website at the time of purchase will apply to the purchase of this product.  See full search results on eBay

Bad As Me is ranked 11th best out of 27 albums by Tom Waits on BestEverAlbums.com.

The best album by Tom Waits is Rain Dogs which is ranked number 98 in the list of all-time albums with a total rank score of 15,766. 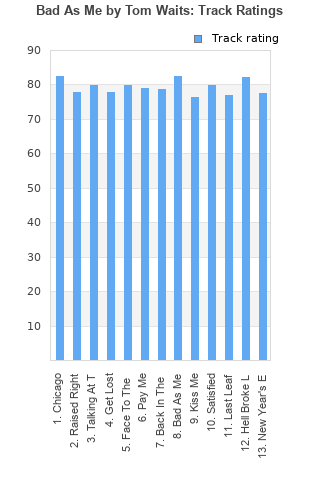 Bad As Me rankings

Bad As Me collection

Bad As Me ratings

Rating metrics: Outliers can be removed when calculating a mean average to dampen the effects of ratings outside the normal distribution. This figure is provided as the trimmed mean. A high standard deviation can be legitimate, but can sometimes indicate 'gaming' is occurring. Consider a simplified example* of an item receiving ratings of 100, 50, & 0. The mean average rating would be 50. However, ratings of 55, 50 & 45 could also result in the same average. The second average might be more trusted because there is more consensus around a particular rating (a lower deviation).
(*In practice, some albums can have several thousand ratings)
This album is rated in the top 11% of all albums on BestEverAlbums.com. This album has a Bayesian average rating of 75.7/100, a mean average of 74.6/100, and a trimmed mean (excluding outliers) of 75.8/100. The standard deviation for this album is 14.0.

Bad As Me favourites

Bad As Me comments

Bad as me, is another excellent album in terms of songs, but it all feels a little like Tom Waits is trying to make the stereotype Tom Waits album. This is the first Waits record where I feel he is stuck, and not quite sure which direction he wants to go in, so he's decided to cover all Tom Waits bases. There's great stuff here like, talking at the same time, hell broke luce, and, back in the crowd, but it's nothing we haven't heard before. Even, new years eve, feels almost like a parody. It's the first Waits album that doesn't have anything new on it. Still, as I said, it's brilliant in terms of quality, but a little short on originality.

Tom Waits is one of those rare artists who just keeps getting better with age.

This is the only Tom Waits album I own myself.
I know his music from friends but I am not sure about the albums names that I have heard. Whatever: This one is my own and it's super.

This is just Tom Waits doing what Tom Waits does best. Making incredible music. He’s never been one to soar across the radio and be incredibly well known, but those who do know him can really appreciate his genius. He’s got a voice that one may call an acquired taste, but if you can look past that, you can see the great music he makes and this album is no exception. Every song is very well-written both lyrically and musically.

Forty years into his career, Tom Waits can still make great, fresh, original music that sounds different from all his previous work. I like every album he's made, and this one's no exception. His best since Mule Variations.

Your feedback for Bad As Me