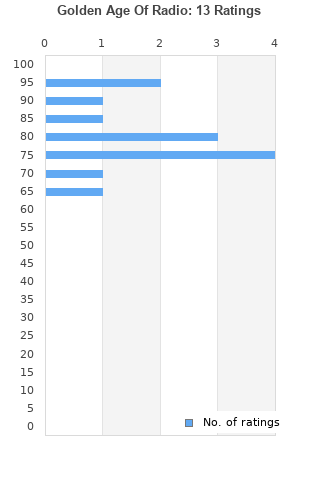 2CD set - Golden Age of Radio by Josh Ritter (CD, Feb-2004, Signature Sounds)
Condition: Like New
Time left: 5d 8h 15m 39s
Ships to: Worldwide
$25.00
Go to store
Product prices and availability are accurate as of the date indicated and are subject to change. Any price and availability information displayed on the linked website at the time of purchase will apply to the purchase of this product.  See full search results on eBay

Golden Age Of Radio is ranked 6th best out of 20 albums by Josh Ritter on BestEverAlbums.com.

The best album by Josh Ritter is The Animal Years which is ranked number 6016 in the list of all-time albums with a total rank score of 212.

Tickets from Ticketmaster Get tickets
May
28
Fri
00:00 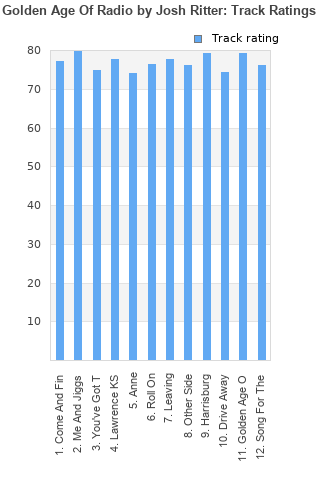 Rating metrics: Outliers can be removed when calculating a mean average to dampen the effects of ratings outside the normal distribution. This figure is provided as the trimmed mean. A high standard deviation can be legitimate, but can sometimes indicate 'gaming' is occurring. Consider a simplified example* of an item receiving ratings of 100, 50, & 0. The mean average rating would be 50. However, ratings of 55, 50 & 45 could also result in the same average. The second average might be more trusted because there is more consensus around a particular rating (a lower deviation).
(*In practice, some albums can have several thousand ratings)
This album is rated in the top 5% of all albums on BestEverAlbums.com. This album has a Bayesian average rating of 77.2/100, a mean average of 80.4/100, and a trimmed mean (excluding outliers) of 80.4/100. The standard deviation for this album is 9.0.

I first learned about Josh Ritter from my buddy John, who heard Josh play at open mics in Edinburgh while he was studying at the School of Scottish Folk Studies. According to John, Josh Ritter didn't make much of an impression on him at the time; his guitar playing wasn't anything special and his songwriting seemed a little immature. But he paid enough attention to follow Josh's career when he started releasing albums, and he was astonished to hear how much he'd grown as a musician by the time Golden Age of Radio came out. So he was pretty evangelical about this one, and I can't blame him. It's such a huge leap forward from his self-titled debut; for instance, check out these lines from the tender love song "Come and Find Me": "If I could trace the lines that ran / Between your smile and your sleight of hand / I would guess that you put something up my sleeve."

Your feedback for Golden Age Of Radio