Down On The Upside (studio album) by Soundgarden 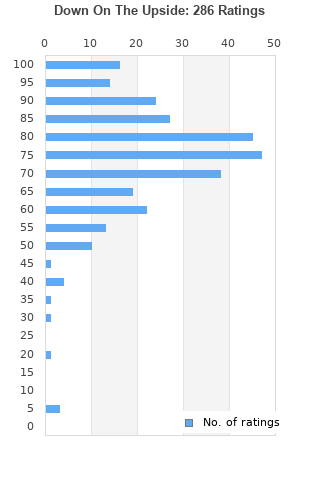 Soundgarden Down On The Upside cassette
Condition: Very Good
Time left: 10h 8m 34s
Ships to: Worldwide
$14.99
Go to store
Product prices and availability are accurate as of the date indicated and are subject to change. Any price and availability information displayed on the linked website at the time of purchase will apply to the purchase of this product.  See full search results on eBay

Down On The Upside is ranked 3rd best out of 13 albums by Soundgarden on BestEverAlbums.com.

The best album by Soundgarden is Superunknown which is ranked number 196 in the list of all-time albums with a total rank score of 9,707. 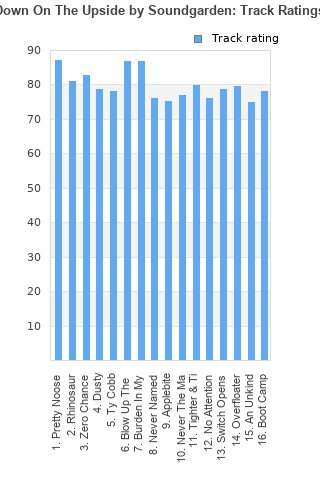 Blow Up The Outside World
Rating: 87 (71 votes)Comments:

Down On The Upside rankings

Down On The Upside collection

Down On The Upside ratings

Rating metrics: Outliers can be removed when calculating a mean average to dampen the effects of ratings outside the normal distribution. This figure is provided as the trimmed mean. A high standard deviation can be legitimate, but can sometimes indicate 'gaming' is occurring. Consider a simplified example* of an item receiving ratings of 100, 50, & 0. The mean average rating would be 50. However, ratings of 55, 50 & 45 could also result in the same average. The second average might be more trusted because there is more consensus around a particular rating (a lower deviation).
(*In practice, some albums can have several thousand ratings)
This album is rated in the top 20% of all albums on BestEverAlbums.com. This album has a Bayesian average rating of 74.7/100, a mean average of 73.9/100, and a trimmed mean (excluding outliers) of 74.8/100. The standard deviation for this album is 15.8.

Down On The Upside favourites

Down On The Upside comments

This album had the difficult task of following up Superunknown and got a bad wrap for not being as good. Taken on its own merits this is great. Often dismissed as more of the same if anything the band continued to experiment with different sounds. With perspective on their career people should dust this one off.

For me, I listened to this albums 100s of times. I absolutely love it. Blow Up The Outside World was overplayed on the radio so it's really the only song I skip. Disclaimer, I was a huge Soundgarden fan. One of the biggest regrets in my life was not being able to see them live.

Probably too long, but there are still brilliant songs like Pretty Noose, Ty Cobb and Blow Up the Outside World. A couple of less inspired tracks contribute to build the gap with Badmotorfinger and Superunknown.

Some very good songs on DotU is *far* too long. By the middle of this record I am normally put into a state of sadness because of the drab production and depressing songs. I enjoy tracks like Burden in my Hand, Blow Up the Outside World, Pretty Noose, and Ty Cobb on their own, but I can't sit through this album as a whole. It's honestly a daunting task.

This is the worst Soundgarden record.

The first seven songs, plus "Tighter & Tighter" and "Switch Opens" are overall amazing, while the rest are average.
The top 3 here are "Pretty Noose", "Blow Up The Outside World", and "Burden In My Hand".

What happened? The secon half of the album is just a WTF. The first half has its moments, but even those feel not only too polished, but creatively spent. Take "Burden in My Hand", for instance. It starts out well, but then just gets boring and repetitive- like, the bridge? Overall pretty disappointing.

there are some amazing tracks. the thing is, is that there are SIXTEEN of them. you can't have a perfect album like "superunknown" when you have a few mediocre tracks bringing down what could have been soundgarden's masterpiece

Good album, with great moments such as Pretty Noose, Tighter & Tighter, Blow up the Outside World and Boot Camp.

Your feedback for Down On The Upside