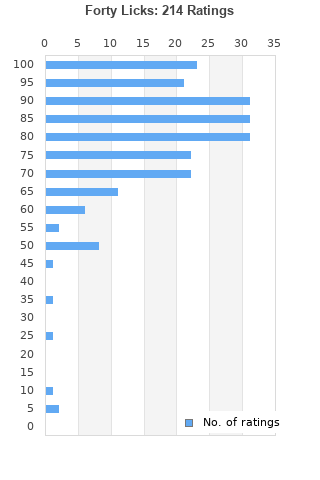 Forty Licks is ranked 30th best out of 96 albums by The Rolling Stones on BestEverAlbums.com.

The best album by The Rolling Stones is Exile On Main St. which is ranked number 43 in the list of all-time albums with a total rank score of 25,851. 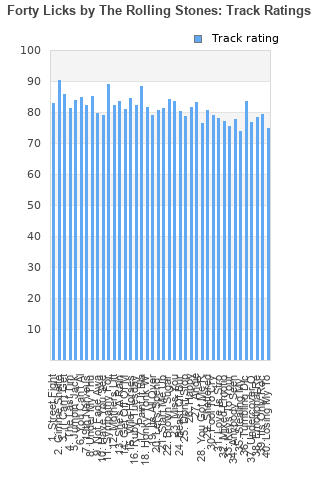 Sympathy For The Devil
Rating: 89 (111 votes)Comments:

Rating metrics: Outliers can be removed when calculating a mean average to dampen the effects of ratings outside the normal distribution. This figure is provided as the trimmed mean. A high standard deviation can be legitimate, but can sometimes indicate 'gaming' is occurring. Consider a simplified example* of an item receiving ratings of 100, 50, & 0. The mean average rating would be 50. However, ratings of 55, 50 & 45 could also result in the same average. The second average might be more trusted because there is more consensus around a particular rating (a lower deviation).
(*In practice, some albums can have several thousand ratings)
This album is rated in the top 1% of all albums on BestEverAlbums.com. This album has a Bayesian average rating of 80.8/100, a mean average of 79.9/100, and a trimmed mean (excluding outliers) of 81.2/100. The standard deviation for this album is 16.3.

This album shouldn't be allowed to be on the list....it's a compilation!

I don't really care for The Rolling Stones albums as a whole. Thats why this album is perfect for me. All the good songs I like and not having to listen to the many songs I do not like on each album.

Honestly Ive always struggled to really get into The Rolling Stones on an album level, but have always enjoyed their top tier songs. The first disc of this compilation is just pure heaven.

Not bad for a compilation album... The first disc is perfect. The second on the other hand contains some of their later material I'm forced to skip.

Why are greatest hits albums allowed? It's ridiculous.

A cowards choice to pick a collection maybe, but ooh so many good songs!

Your feedback for Forty Licks