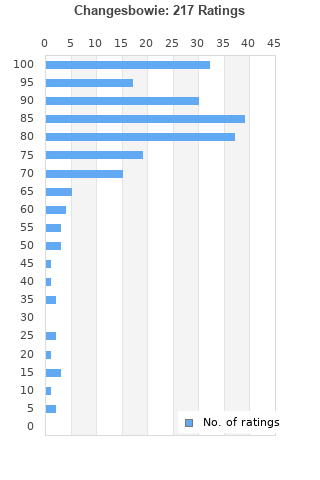 Changesbowie is ranked 29th best out of 88 albums by David Bowie on BestEverAlbums.com.

The best album by David Bowie is The Rise And Fall Of Ziggy Stardust And The Spiders From Mars which is ranked number 9 in the list of all-time albums with a total rank score of 57,359. 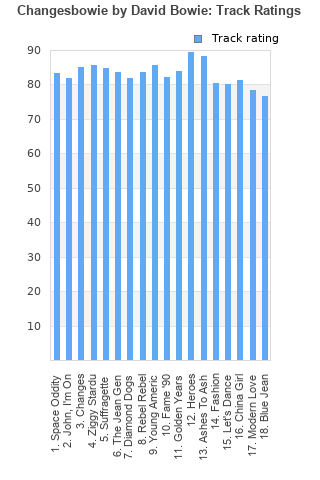 Rating metrics: Outliers can be removed when calculating a mean average to dampen the effects of ratings outside the normal distribution. This figure is provided as the trimmed mean. A high standard deviation can be legitimate, but can sometimes indicate 'gaming' is occurring. Consider a simplified example* of an item receiving ratings of 100, 50, & 0. The mean average rating would be 50. However, ratings of 55, 50 & 45 could also result in the same average. The second average might be more trusted because there is more consensus around a particular rating (a lower deviation).
(*In practice, some albums can have several thousand ratings)
This album is rated in the top 1% of all albums on BestEverAlbums.com. This album has a Bayesian average rating of 82.4/100, a mean average of 80.5/100, and a trimmed mean (excluding outliers) of 82.9/100. The standard deviation for this album is 18.7.

Great compilation especially for casual fans with a lot of Bowie’s most popular songs save for the deeper cut John I’m Only Dancing. The songs flow very well together which makes it more than a typical greatest hits album.

Fantastic compilation if you're just after hearing all his hits and popular songs in one sitting. Nearly all songs on this are total classics.

Perfect introduction to Bowie for someone who were too young to enjoy it as it came out. Loaded with classic tunes.

Some great songs on this collection

How can you rate a greatest hits package of one of the most important musicians of the last century? Sadly, not as high as the original Changesonebowie compilation! The original was clean, to the point, a perfect best of compilation, however this being a facsimile just doesn't work because the Fame remake is awful, and the inclusion of tracks from post Hero's album are in hindsight just weak in comparison to Bowie's best album tracks.

The first Bowie CD I ever owned, I used to listen to it over and over again... Some hits are painfully absent (Life on Mars, Sound and Vision...maybe Under Pressure) but overall it's the best Bowie best of.

Great collection, that really lives up to its name.
It should have been released on CD with the same track-listing as the LP/MC. If you take available (single) edit versions of "Diamond Dogs", "Young Americans", "Golden Years", "Ashes To Ashes" and "Fashion" all 21 tracks fit perfectly on one CD. At least, that's the way I've put it on MiniDisc - with "Fame '90" replaced by the 1975 original, of course ;)

A good career retrospective to one of the all time greats. A quick way to learn what the Thin White Duke is all about. After listening, go check out Ziggy Stardust.