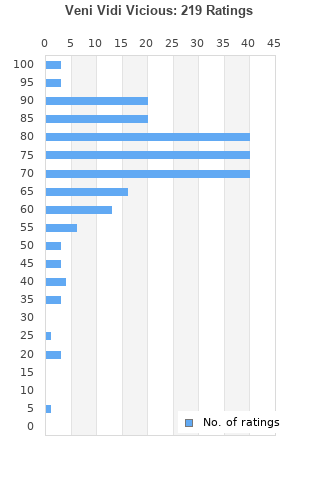 Veni Vidi Vicious is ranked as the best album by The Hives. 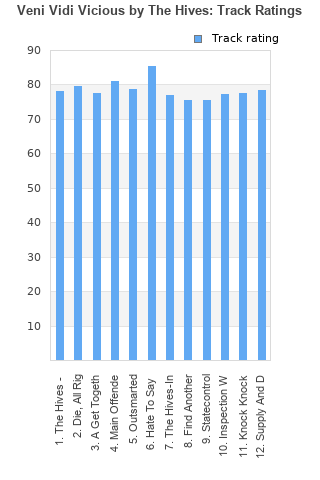 Rating metrics: Outliers can be removed when calculating a mean average to dampen the effects of ratings outside the normal distribution. This figure is provided as the trimmed mean. A high standard deviation can be legitimate, but can sometimes indicate 'gaming' is occurring. Consider a simplified example* of an item receiving ratings of 100, 50, & 0. The mean average rating would be 50. However, ratings of 55, 50 & 45 could also result in the same average. The second average might be more trusted because there is more consensus around a particular rating (a lower deviation).
(*In practice, some albums can have several thousand ratings)
This album has a Bayesian average rating of 73.8/100, a mean average of 72.4/100, and a trimmed mean (excluding outliers) of 73.8/100. The standard deviation for this album is 14.9.

A very fun and energetic album with several excellent songs. But having seen them live, everything sounds much more tame on record. I have a similar opinion of other Hives albums. Hate to bring their rating down cause I really like them as a band, but the albums always lack something. That being said, there's nothing better than playing Veni Vidi Vicious and Tyrannosaurus Hives back to back when you're feeling down.

Short sharp and good. You know the Hives and you know what you’re getting here. Rocking goodness!

Favoritas: Find Another Girl, Hate To Say I Told You So, Main Offender, Die All Right

Hives overachieve on their smirking attitude. Their charm gives them extra points in my book.

Hysterical modern punk, absolutely marvelous. It's brutal, catchy, quick, and in the end a lot of fun. As far as 21st century's punk go, this is the best I know.

Probably the most light hearted album I've ever heard, I bet if The Strokes came out before this people would think of this as a parody album! That said its pretty good. Just straight up rock and roll with no pretense, classic post-punk revival.

Few good songs here and there. Not bad at all. The Strokes came after, but I prefer them. 2 very similar bands. The Hives are probably a bit more punk though.

Your feedback for Veni Vidi Vicious