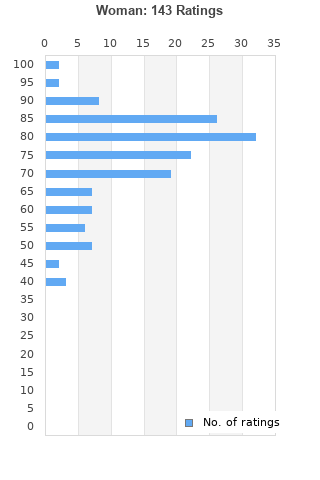 Woman is ranked as the best album by Rhye. 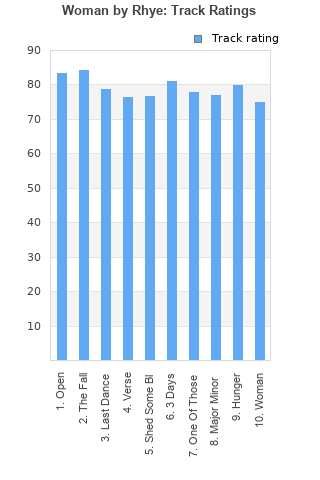 Outliers can be removed when calculating a mean average to dampen the effects of ratings outside the normal distribution. This figure is provided as the trimmed mean. A high standard deviation can be legitimate, but can sometimes indicate 'gaming' is occurring. Consider a simplified example* of an item receiving ratings of 100, 50, & 0. The mean average rating would be 50. However, ratings of 55, 50 & 45 could also result in the same average. The second average might be more trusted because there is more consensus around a particular rating (a lower deviation).
(*In practice, some albums can have several thousand ratings)
This album is rated in the top 24% of albums on BestEverAlbums.com. This album has a mean average rating of 75.0/100. The trimmed mean (excluding outliers) is 74.5/100. The standard deviation for this album is 12.7.

Couldn't believe that this was a man singing aha. Great album

Beautiful album. The first two tracks completely floor me, and the rest is still excellent.

This is definitely an album that is different, unlike much of anything you’ll hear. I was trying to give this album a genre, trying to figure out what it would fit into and I decided on a somewhat pop, somewhat R&B feel. Then I looked them up on Wikipedia and the genre that was given was “Alternative R&B" which I think is a perfect description of what Rhye is. It’s got this smooth, R&B-like feel to it, without being overly zealous, which R&B can do sometimes. It’s very minimalistic at times as well, with relatively little instrumentation outside of some electronic beats and a keyboard, and it has this soft sound to it with a soft falsetto-singing done throughout the album. My issue with the album was this: it wasn’t terrible interesting. At first it was, I thought “Hm, this is a different kind of sound" but it didn’t go anywhere, it stagnated. It remained the same throughout the whole album. It’s decent, but it wasn’t anything mind-blowing.

A really pleasant listen with some beautiful instrumentation. I think at times it gets a bit too simple without enough variation, but the songwriting and production make it easy to overlook. One of Those Summer Days is especially lovely.

Yes, this album also reminds me of Sade's silky-smooth r&b. However, unlike Sade, the hit factor is missing; that extra specialness in the grooves that begs for repeat listens at the song level. A few songs come close, like "open", "3 days" and especially "hunger". Good album, just not Sade good.

This album never shakes the Sade "Diamond Life" spin-off vibe. I find it distracting. Other than that, it's a decent record. You may hear "Open" on mainstream radio @ some point this year.

This might go down as the R&B album of the year. What an excellent release.

Your feedback for Woman