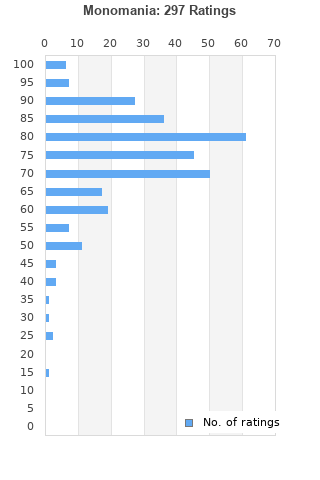 Monomania is ranked 3rd best out of 13 albums by Deerhunter on BestEverAlbums.com.

The best album by Deerhunter is Halcyon Digest which is ranked number 264 in the list of all-time albums with a total rank score of 7,217. 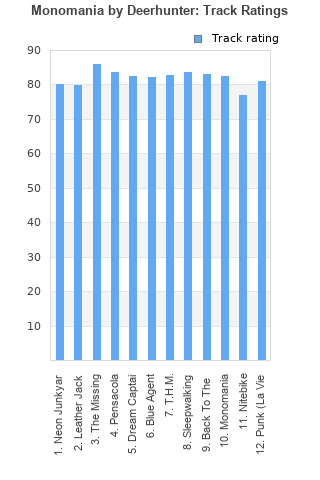 Rating metrics: Outliers can be removed when calculating a mean average to dampen the effects of ratings outside the normal distribution. This figure is provided as the trimmed mean. A high standard deviation can be legitimate, but can sometimes indicate 'gaming' is occurring. Consider a simplified example* of an item receiving ratings of 100, 50, & 0. The mean average rating would be 50. However, ratings of 55, 50 & 45 could also result in the same average. The second average might be more trusted because there is more consensus around a particular rating (a lower deviation).
(*In practice, some albums can have several thousand ratings)
This album is rated in the top 15% of all albums on BestEverAlbums.com. This album has a Bayesian average rating of 75.0/100, a mean average of 74.4/100, and a trimmed mean (excluding outliers) of 75.1/100. The standard deviation for this album is 13.5.

It's nice, but not many tracks on this album really stand out to me. Highlights are Pensacola and Back To The Middle.

Buried beneath overexposed, overplayed fluff pieces and quality indie artists that have trickled into the general populace, we find Atlanta's long-serving, consistent Deerhunter, an entity that find themselves continually on the precipice of burgeoning popularity but consciously camouflaging from the very prospect. The band are seemingly insistent on remaining a fixture of the underground music scene despite their talent for the melodic. Frontman and flag bearer for the group, Bradford Cox, plants his flag firmly in the soil of washed out and weird for the group's sixth LP, Monomania. If the band were amalgamated as a human being, Cox himself would be the physical result of the synthesis and Monomania is cited as the record he's most proud of. The group had long since represented the socially challenged in their music, crafting anthems for the charmingly awkward and the uncontrollably shy. Adversely, Monomania is charged with aggressive energy that sees the band slip into an alternate headspace, one which they adapt to and conquer with proficiency. Cox has expressed that the LP is quasi-biographical, fueled by his state of mind at the time. As a result, the record spends less time meandering through forests during sundown à la earlier Deerhunter efforts. Instead, it cuts straight to the bone and forms a modern classic amidst an already decorated catalogue.

The noise rock sheen is cemented with opening track, "Neon Junkyard", which invokes one of Cox's treasured acts, Royal Trux. The singer's vocals are vigorously clouded, more congruous with the guitars of Lockett Pundt and Frankie Broyles as opposed to a single melodic entity. Though the music is unabashedly direct, the lyrics present more of an abstraction. Cox scowls, "Finding ancient language in the blood, fading a little more each day." It's an apropos entry point into the thematic stylings of Monomania. "Leather Jacket II" amplifies the intensity, ushering in garage rock swagger braced by howling guitars that emerge midway through the track. Cox's vocals are even further back in the mix but his tape manipulation helps color the song's intentionally rough edges. The sentiments are more transparent here as Cox sings, "I was just bones; Yeah I barely tried, they always cut my head off." Cooler heads prevail as "The Missing" comes into view. Vocal duties are handed off to Lockett Pundt who penned the song. His serene voice cascades downward, dousing water over the fire lit by the band in "Leather Jacket II". The piece is reflective and acts as a comedown for a record still in its infancy. Bradford contributes on the cut as well, as his soothing synthesizer and heartbeat drumming provide a soft landing for Pundt's fragile vocals. "Pensacola" is a slice of southern-hospitality, served straight from Deerhunter's unorthodox, noisy kitchen. Josh McKay's bass and Cox's percussion pump blood through it and provide bouncy buoyancy for the prose. Cox's character yearns to leave behind an undesirable home life, even for the unlikely haven of Pensacola, Florida. The rhythm section shines again in the following piece, "Dream Captain", which details another account of a caged bird looking for escape. It's clear by now that Cox has projected the specifications of the personal prison he called home onto the face of the album. Here, he longs for a manifested fantasy skipper to whisk him away from a terrible place in a hopeless time. Sixth track, "Blue Agent", unfurls as a prickly yet magnetic testimony of a friendship gone awry, devolving into quiet resentment. Cox brags, "If you ever need to talk, I won't be around; If you ever need to fight for life, I'll make no sound." The song brandishes cold and calculated malice masquerading as rhythmic curiosity, encapsulating Monomania's essence.

The second half of the record commences with the cold guitar line that highlights "T.H.M", a ghostly track that touches upon the suicide of Cox's younger brother. Hauntingly profound, the poetry recounts early morning phone calls from the dead and failed attempts at brotherly course correction. Josh McKay's bass rests beneath like an ankle-high fog as the room's temperature takes a dive. Cox laments, "My head was like a wound when they called me and said, It's happened much too soon". Eighth track, "Sleepwalking" sports chugging inertia with Moses Archuleta's drums powering a piece that deals with the removal of rose-colored glasses. A union is coming apart due to a bittersweet epiphany as Cox explains, "Can't you see, we've grown apart now." It is, without a second notion, the rhythmic jewel of Monomania. "Back to the Middle" functions as an epilogue of sorts for "Sleepwalking". The production here is translucent in comparison to the rest of the record, furthering the theme of clarity of recollection. Organ passages tether the verses together to give the track flavor amidst the straight-forward melodic approach. The title track screeches as it shakes your hand, assuring that no other is more fit to bear the album's namesake. The song is a volcano of frustration, touching on themes of unfulfilled sexuality and uncompromising, emotional resolve. Cox remains romantically stymied but staunchly unwilling to accommodate to shallow expectations. "There is a man; There is a mystery whore and in my dying days I could never be sure," Cox declares. Repeated utterances of "Monomania" lead us out with a double act of definition and implementation. Sonically, the track is the most visceral of the record. "Nitebike" picks up the pieces of previous fury with a literal recording of a modest motorcycle. The song itself, which shines light on Cox's complicated youth, consists of just Bradford and an acoustic guitar. The ruminative space that "Nitebike" occupies calms the wounds left in "Monomania's" wake. It's a highly shaded anecdote that inhabits a peculiar but welcomed space. On the final track, "Punk (La Vie Antérieure)" employs hypnotic wordplay alongside dizzying psychedelics to create one of the album's most sensory experiences. "Punk" traverses ideas of self-identity and how fruitless it can be to fit a round peg in a square hole. The band double up on bass duty here, ensuring a muggy undertone to Cox's lyrics. "Punk" guides the album to its conclusion in a catchy and clever fashion.

The labyrinthian mosaic being weaved by the Atlanta outfit is still being constructed. Like an evolving amoeba, Deerhunter often deconstruct and rebuild sonically in order to please themselves. There's no quaking, self-serving desire to conform in fear of being left behind, a tactic that many of their peers would employ. This unit had already survived deaths, multiple label alterations and hiatuses all while boasting one of modern music's most dependable discographies. Cox has long lambasted the selection of the band's namesake, rejecting any connotations or discussions it may inspire. The name simply has no significance, save for a mark of consistent quality. However, it's Cox's very rejection that carries the utmost significance, indicating an endless desire to push boundaries and avoid creative complacency. Despite Monomania being a voracious account of a difficult time, repeated ingenuity is not something Deerhunter struggles to achieve. With the treasure trove that is the band's criterion, others would likely point to earlier triumphs like Halcyon Digest or Microcastle as potential crown jewels. However, like the band's purposeful ability to conceal and distance itself away from a steadily hollowing indie scene, Monomania is a proper masterpiece hiding in plain sight. They say still waters run deep and that's true of human beings, but in Deerhunter's case, their most raucous effort surely has the most to say.

"Your bones they were always, they were always in my way
The fire finds a way to completely erase
I followed you out
You threw up and you complained
And I bide my time, and I hide my glory away
In the basement room where you used to kneel and pray"

Should have been called "Back to the Middle".

The guitar line in "T.H.M." is beautiful.

It's nothing groundbreaking or monumental, but I'm surprised this hasn't gotten more BEA love...

Didn't strike me as much as Halcyon Digest. But I can respect if they wanted to do something different. I mean it certainly works as a concept album

Like Modest Mouse before them, these indie darlings created decent follow up to their rapid ascension into cosmic bliss by returning to their rock roots. Though this album is grittier than Microcastle or Halcyon Digest, it is also more subdued.

Your feedback for Monomania