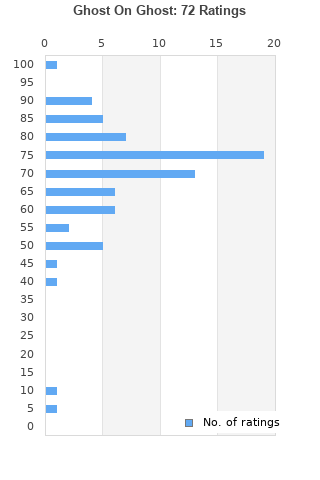 Ghost On Ghost is ranked 5th best out of 13 albums by Iron & Wine on BestEverAlbums.com.

The best album by Iron & Wine is Our Endless Numbered Days which is ranked number 975 in the list of all-time albums with a total rank score of 1,882. 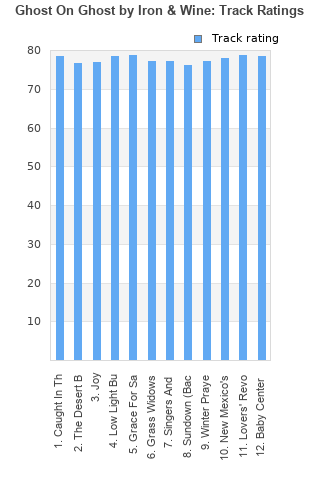 Outliers can be removed when calculating a mean average to dampen the effects of ratings outside the normal distribution. This figure is provided as the trimmed mean. A high standard deviation can be legitimate, but can sometimes indicate 'gaming' is occurring. Consider a simplified example* of an item receiving ratings of 100, 50, & 0. The mean average rating would be 50. However, ratings of 55, 50 & 45 could also result in the same average. The second average might be more trusted because there is more consensus around a particular rating (a lower deviation).
(*In practice, some albums can have several thousand ratings)
This album has a mean average rating of 71.0/100. The trimmed mean (excluding outliers) is 71.5/100. The standard deviation for this album is 14.3.

I must be missing something with this guy. I guess I just don't get it.

Sam Beam builds upon the funkiness of "Kiss Each Other Clean" and ups the ante. The simplicity and solitude of his folky "creek drank the cradle" has given way over time to more instrumentation, more production and more uplifting vocal confidence, all in full display here from opening track "caught in the briars" (with its pleasant harmonies, horns and playful instrumental piano-and-horn outro) to "lovers' revolution". I like the jazzy touches. The personal and emotional moments, like in "winter prayers", once his strong suit, now pose the weakest elements on "ghost on ghost". Hardcore fans of his early works probably have been losing interest over time, but his shift into bigger arrangements is working well for me.

I will never like anything he does as much as Creek Drank the Cradle. I can't fault the guy for evolving, but there just isn't anything here that interests me.

A bit of a return to form after "Kiss Each Other Clean" tried to be too much and ended up not being much of anything at all. The more ambitious instrumentation is still here, but the subtlety of the early albums is back, with a little soul and a little jazz added to the mix.

Sam Beam has been making some good music for awhile now, peaking (so far) with “The Shepard’s Dog". He’s always had quite a knack for writing good indie-folk music. Some of it’s been just alright, some of it has been really good (see: “The Shepard’s Dog" and “Our Endless Numbered Days"). This falls somewhere in between. There are some really great songs on here, the quiet, old-Iron-&-Wine sounding “Winter Prayers" and “The Desert Babbler" being chief among them. The album is a little inconsistent though, bouncing around between indie folk sounds jazz type sounds. The jazz doesn’t work as well, but there’s certainly enough on this album to like, it’s worth checking out.

I like it, but it's definitely my least favorite Iron And Wine album. I appreciate his evolution with each album, but I feel that since the Shepherd's Dog he's taken a couple steps back. Enjoyable nonetheless.

I love Iron & Wine but (early days I know), this album really doesn't grab me @ all. Sounds very ordinary compared to their other albums. Might be a grower I guess.

Your feedback for Ghost On Ghost