Field Of Reeds (studio album) by These New Puritans These New Puritans - Field Of Reeds (NEW CD)
Condition: Brand New
Time left: 9d 13h 58m 39s
Ships to: Worldwide
£11.99
Go to store
Product prices and availability are accurate as of the date indicated and are subject to change. Any price and availability information displayed on the linked website at the time of purchase will apply to the purchase of this product.  See full search results on eBay

Field Of Reeds is ranked as the best album by These New Puritans. 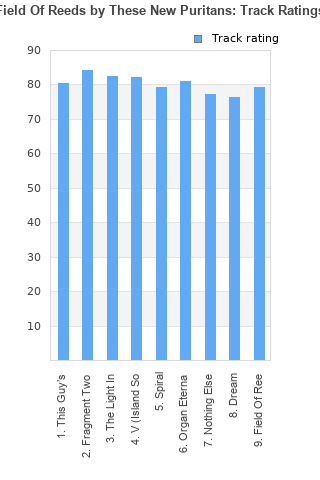 Rating metrics: Outliers can be removed when calculating a mean average to dampen the effects of ratings outside the normal distribution. This figure is provided as the trimmed mean. A high standard deviation can be legitimate, but can sometimes indicate 'gaming' is occurring. Consider a simplified example* of an item receiving ratings of 100, 50, & 0. The mean average rating would be 50. However, ratings of 55, 50 & 45 could also result in the same average. The second average might be more trusted because there is more consensus around a particular rating (a lower deviation).
(*In practice, some albums can have several thousand ratings)
This album has a Bayesian average rating of 73.5/100, a mean average of 72.7/100, and a trimmed mean (excluding outliers) of 73.6/100. The standard deviation for this album is 17.3.

after a few listens, i'd say its alright. definitely interesting and unique..something to get lost in..but the album is very dreary all the way through.
EDIT: After not hearing this album for quite a long time, i have come back to it out of curiosity and enjoyed it more than ever... i think its just that kind of album.

It's like a graveyard came from the disc itself... actually sounds good.

The band has taken a completely different turn on this new record and although it's less easy to access there is a great quality to the compositions.

This album is incredibly interesting to listen to. You have to be impressed by the sheer scope of it. I mean, These New Puritans use just about every instrument you can imagine, this album is almost like a minimalistic symphony of sorts. TNP keep kind of reinventing themselves over each album. This is their third, their first album since 2010’s “Hidden". It’s definitely interesting, the composition and everything. There are moments where the album gets a bit slow, but there are also some moments that are just beautiful. The organ in “Organ Eternal", for example, is beautifully done. It’s a pretty good album, it’ll definitely keep you intrigued for the most part.

Your feedback for Field Of Reeds