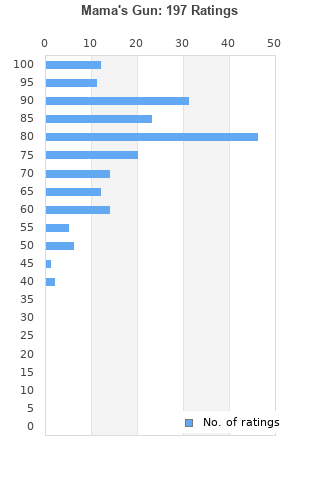 Mama's Gun is ranked as the best album by Erykah Badu. 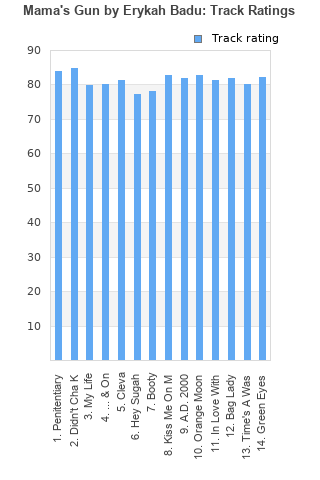 Rating metrics: Outliers can be removed when calculating a mean average to dampen the effects of ratings outside the normal distribution. This figure is provided as the trimmed mean. A high standard deviation can be legitimate, but can sometimes indicate 'gaming' is occurring. Consider a simplified example* of an item receiving ratings of 100, 50, & 0. The mean average rating would be 50. However, ratings of 55, 50 & 45 could also result in the same average. The second average might be more trusted because there is more consensus around a particular rating (a lower deviation).
(*In practice, some albums can have several thousand ratings)
This album is rated in the top 3% of all albums on BestEverAlbums.com. This album has a Bayesian average rating of 78.4/100, a mean average of 78.7/100, and a trimmed mean (excluding outliers) of 78.7/100. The standard deviation for this album is 13.5.

Fantastic, moody, and stylish neo-soul for your late afternoon doze off...

Perhaps a step above Baduizm.

This album is such a good listen

R and B goodness, smooth as a Dolphins skin.

The 2nd E.Badu album was a double album. Mama's Gun carries on where Baduizm left off, more laid back neo soul jazz sounding songs. The whole album flows along at a slow & mellow pace with jazz leanings. No song is better than the other as all the parts of this album make the album whole, so it would be unfair to single out one track above the rest. I should add that it takes a few listens before it all sinks in.

One of the great r'n'b albums. Mama's gun, deals predominantly with Erykah Badu's break up with Andre 3000, and is an excellent collection of beautiful and original soul. Even if you're not a massive r'n'b fan, Mama's gun, is still an album you might just enjoy. Brilliant.

Haven't listened to it in a while, a pitty that is, a phenomenally smooth recording by a seriously underrated goddess...

Your feedback for Mama's Gun